2013 was a great year for movies. Everyone is saying that, so it must be true. In reality, a lot of garbage came out this year too. But the highs were really high. This is my first attempt at making a top ten list. I’m no expert; obviously these selections are all based on my (surprisingly) fallible judgment. This is no easy task, despite being a task no one ever asked me to undertake. I’m also not very solid on my rankings. Numbers 4 through 1 especially can and do move around in my mind. This feels right though. For now.

Award for Best Drama About Youth

Mike Nichols’ latest film, Mud, is an ensemble piece wherein the arrival of a stranger throws a small community into upheaval. There are great performances all around (Mud is an essential addition to The Great McConaughey Renaissance), but Tye Sheridan stands out the most as the young man at the film’s center. In his performance we see all of the familiar angst and turmoil that defines that time in a young person’s life.

9. The Kings of Summer 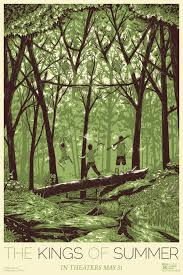 Award for Best Comedy About Youth

To call The Kings of Summer an out-and-out comedy would be reductive. All of the emotions of Mud are present in this film as well, but The Kings of Summer travels a different path. Director Jordan Vogt-Roberts gets excellent performances out of his three young leads: Nick Robinson, Gabriel Basso, and Moises Arias. The guys are backed by supporting turns from some of the best  comedic voices working now, even though they may not all be familiar to you.

Award for Most Self-Aware Movie

The critical and financial success of Fast Five was a surprise. Sure, if you add The Rock to your movie you are going to do gangbusters, but I don’t think anyone expected it to be as good as it was. Which left the sixth installment of the franchise in a bit of a predicament: reproduce that quality, without being crushed by expectation. And Justin Lin’s Fast & Furious 6 does exactly that. Perhaps some people will invalidate my list for this film’s inlcusion, but to them I say “I don’t care.” Yes this movie is absurd, but that is exactly what it should be. There were no false aspirations in making this movie. The filmmakers wanted to make a blockbuster, and they ended up with the best one of the summer. In light of recent tragic events the franchise’s future is up in the air, but this movie will always stand as a testament of how good a popcorm movie can be.

Award for Most Infectious Music

The Coen Brothers’ latest film was one of those late December releases that we have come to know as Oscar bait. I saw it only recently, but I’ve been listening to the soundtrack practically nonstop ever since. And each listen enriches the memory of the film in my mind. This is a movie I can’t wait to see again so I can pick apart all of the pieces, and the biggest piece is Oscar Isaac’s performance as the titular folk singer. This is his movie, and every one else is there to service his journey. And have we ever seen better acting from a cat? I don’t think so.

Award for Most Restrained Emotional Manipulation

Destin Cretton’s film about the staff and patrons of a foster care facility could easily have dissolved into alternating moments of unearned sadness and blubbering triumph. That the subject matter is ripe for such treatment makes Cretton’s restraint all the more impressive. A good deal of the credit also goes to Brie Larson, who makes her character immensely real and believable.

The Past is Asghar Farhadi’s new movie about love, loss, regret, guilt, hatred, and pretty much everry other emotion human beings can feel. Farhadi is Persian, a good number of his actors only spoke French, and I saw the movie with English subtitles. Despite these barriers, nothing is lost in translation. The film is a powerful story that makes strides to speak to viewers of any age and from any background.

4. The Act of Killing

Award for Most Horrifying Subject

The Act of Killing is a really difficult movie to watch. Filmmaker Joshua Oppenheimer follows the perpetrartors of the Indonesian genocide as they attempt to recreate their crimes as a crime. These men are mass murderers (and largely remorseless), but the documentary humanizes them in a way that is fascinating and disturbing. Oppenheimer is a gifted editor as well, finding humor in both his subjects’ personalities and the irony they craft on a daily basis. The Act of Killing is relentless, but it is also important. And it is satisfying, in a very morbid way.

I mainlined Richard Linklater’s Before trilogy over the course of several days. It was a trippy experience to be sure, but I was so glad I did because Before Midight is a low-key masterpiece. Julie Delpy and Ethan Hawke both bring so much baggage to their characters that it is hard to believe we haven’t caught up with them in nine years. And that argument? Christ. So visceral. So dirty. So real. I haven’t experienced a relationship quite like the one between Jesse and Celine, yet I was able to identify with the characters and feel these emotions along with them. If that’s not a sign of a great movie, I don’t know what is.

And apologies to Back to the Future Part III for having to take away its previously held award.

Award for Most Affecting Film

Talk about feeling emotions I never could have experienced! Holy hell. Well, that’s what this movie is like: hell. Director Steve McQueen takes a matter-of-fact look at slavery in this film that never once allows you to distance yourself from the atrocities. Emotional manipulation isn’t really at play here at all. Instead the emotion is raw and biting. Chiwetel Ejiofor’s performance is perfectly traumatized, Michael Fassbender is at his sadistic best, and Lupita Nyong’o is a revelation. And I know that sounds like hyperbole, but she honestly revealed a lot in her role as Patsey, Fassbender’s Epps’ favorite slave. This movie is in line to win some big awards, and if at least a couple of these performances aren’t recognized it will be a real shame.

Award for Most Believable Relationship

Her had a weird trailer that was really easy to make fun of. The movie looked like Lars and the Real Girl meets 2001. But the movie is so much more than that. Spike Jonze creates a palpable future on the verge of some really amazing techological advances. With the advent of artifical intelligence comes a new kind of romance, but these human/computer relationships are no less real than what we experience with each other. Scarlett Johansson makes this reality believable. Her voice performance is so present that she leaves you no option but to identify with her. Samantha is a brand new life form and the movie is as much about her learning about the world around her as it is about her relationship with flesh-and-blood human Theodore Twombly (Joaquin Phoenix) – which is still my favorite character name of the year. Joaquin Phoenix is no slouch either. He appears in every scene in the movie. If Johansson is the metaphorical, Valentine’s Day-esque heart of the film, Phoenix is the literal, blood-pumping one. His subdued turns rivals Ejiofor’s in 12 Years a Slave (deployed in a very different way) and it was a very nice change of pace from Phoenix. Her is an ambitious movie that tackles so many disparate ideas – how could it not be in the conversation for best movie of 2013?

I saw so many good movies this year. I’m going to list them because, why not? 56 Up, All Is Lost, American Hustle, Blue Is the Warmest Color, Blue Jasmine, Captain Phillips, Drinking Buddies, Final Cut: Ladies and Gentlemen, Frances Ha, Frozen, Gravity, In a World…, Much Ado About Nothing, Nebraska, Philomena, Prince Avalanche, Sound City, This Is the End, Thor: The Dark World, Tim’s Vermeer, Upstream Color, The Way Way Back, The Wind Rises, The Wolf of Wall Street, The World’s End. If you know me (and you must, otherwise what are you doing here?) and you trust my impeccable taste take a flyer on any of these movies. You’ll find something to like. That’s a guarantee (disclaimer: not an actual guarantee).