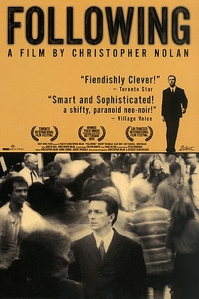 I’m still trying to watch a new movie everyday. I keep track on them on letterboxd (http://letterboxd.com/stevencohen/films/diary/), which everyone should be using (because we all have the almost-pathological need to keep lists, right?). Nothing good really comes out in the early part of the year, so I’ve been going to Netflix a lot more to watch some of the weird stuff on there. Christopher Nolan’s first feature, Following, has been on “My List” since the days it was called “My Queue.” Tonight, I finally sat down and watched it.

I’ll be honest, the main reason I chose this movie was because it has a runtime of 70 minutes. The fact that it is a Nolan film is a close second, but second place is second place. Nothing is that short anymore; and while I would probably start to feel ripped off if most movies I paid to see in theaters were just a little over an hour long, it is perfect for this film.

Following is the story of The Young Man (the credited appellation of Jeremy Theobald’s character), a writer in London searching for inspiration. He begins following several people around the city. One of these unsuspecting civilians, Cobb (Alex Haw), draws The Young Man into the noir-ish underbelly of society. The Young Man begins to luxuriate in his new associations, with both Cobb and a young woman known only as The Blonde (Lucy Russell), and doesn’t realize how deep he has sunk until it might be too late to pull himself out.

The film is really cool to watch as an artifact of Christopher Nolan’s development as a filmmaker. Many of the staples of his later work are found in Following, particularly his use of non-linear narrative, which Nolan would go on to use so well in Memento and Batman Begins. It is surprising to see how effectively Nolan uses this device at this early stage in his career; the editing is vague at times, but everything that the viewer needs to know is made clear by the movie’s conclusion.

The path to the ending is dotted with the twists and turns Nolan loves almost as much as defying linearity. These left-turns are very reminiscent of what Nolan will do later in The Prestige. In fact, the whole movie at times feels like the thesis at the beginning of the essay that will be Nolan’s oeuvre. He doesn’t use any of his regular techniques as deftly as he will in the future, but they are all present.

One of the bigger issues is that the central puzzle comes off as more contrived than do the stories in any of Nolan’s subsequent films. To an extent this can be attributed to the sub-par acting. I don’t want to pick on any of the actors for their lack of experience, but compared to the level of talent Nolan would be working with only two years later it is a little jarring. Especially toward the end of the film, Theobald attempts to hit emotions that he just can’t back up. When he plays coy, however, he is quite good.

None of the performances detract too much from the movie. Following is indicative of a raw talent trying to make its mark. You must agree contemporary film has definitely benefited by this movie’s legacy, even if you think Nolan’s last couple movies haven’t been great. I mean, this year we’re finally gonna get that Nolan-McConaughey team-up we’ve all been waiting for. That definitely wouldn’t have happened if it weren’t for this film. For that alone I appreaciate Following. The fact that it’s pretty good doesn’t hurt it’s case.