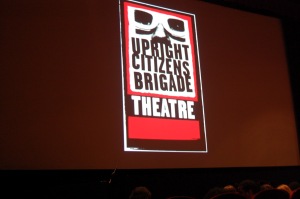 A friend of mine recently told me that he thinks improvised comedy is one of the most important art forms that we have. Two things: 1) this guy isn’t even an improviser (which raises the question of why I was even interacting with him), and 2) he was at least a little drunk. So, while I take what this anonymous “friend” said with a grain of salt, I do agree that improv has a lot of redeeming qualities that should bring it more attention than it currently has.

Ben Schwartz (House or Lies, Parks and Recreation) is one of the soldiers banging the improv drum. Schwartz has been involved with the Upright Citizens Brigade for an amount of time that I can’t really speak to because I’m not a girl in her twenties. Regardless of my current gender status, I do have a deep appreciation for Schwartz’s work, and now that he is becoming more famous he is doing a lot for the improv artform. (Almost) every month Schwartz curates a show called Snowpants, wherein veteran improvisers perform alongside celebrities who have never practiced the undertaking. Tonight’s line-up included improv superstars including Schwartz, Horatio Sanz (Saturday Night Live), Zach Woods (The Office), and Thomas Middleditch, who you don’t know, but you absolutely should. They were joined rookies Jennifer Carpenter (Dexter) and Henry Winkler (come on, you know).

Schwartz and his cohorts (rhymes!) go a long way to create a safe and inviting atmosphere for the guests. And they do a great job. Winkler and Carpenter took a lot of chances, and they paid off for the most part. Both showed great moments of inspired game-play, supported by the experts.

I don’t have much more to say about the show. It was great. The whole thing. That’s an opinion you can trust, because I was once described by an improv teacher as being “pretty good at this.” Support your local improv endeavors. Who knows, you might be seeing the next Ben Schwartz. Or the next Steven Cohen.