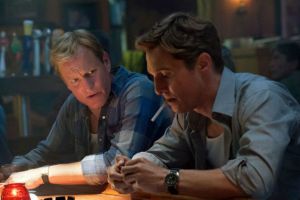 Television is known as the “writer’s medium.” Once a feature screenplay gets into the hands of a director it is widely accepted that the movie’s authorship is handed off as well; but in television the executive producer or showrunner calls the shots. A television director isn’t expected to break new ground – in fact it often falls to a TV director to maintain the tone that has already been established. True Detective, however, is one of those shows that just refuses to adhere to convention. Up to this point it has been unclear just who is in the driver’s seat on this project: writer Nick Pizzolatto or director Cary Joji Fukunaga. Well, Fukunaga certainly fired a shot across his co-conspirator’s bow in this most recent episode.

After a week off (thanks to a terribly uninteresting Super Bowl) True Detective seemed ready to return with an episode that was more of the same. This was disappointing, as the previous episode – “The Locked Room” – seemed to be leading to a pivotal moment in the series. The rug gets pulled out from under that development pretty early on in “Who Goes There” (I’m assuming that confrontation will come toward the end of the season) and we are led to believe that the episode will continue to follow Detectives Cohle (Matthew McConaughey) and Hart (Woody Harrelson) as they hunt down clues in their ritual murder case.

My complaints about the series can mostly be boiled down to this idea that nothing happens. I hate that that is reason why I haven’t connected with the series, because that notion runs counter to everything I like in TV. I love a slow burn, so it’s hard for me to be critical of a show that is clearly going for that effect. But even I have a breaking point (see: The Walking Dead). Honestly though, aside from a couple character moments, the status quo has remained the same over the course of the previous three episodes. Especially in the 2012 scenes – which are still huge offenders on this front. At the very least we got some forward momentum in seeing that Cohle is not being completely honest in his interview. That’s something, I guess.

So I was mentally preparing for another ambivalent post about “waiting-and-seeing” (the most non-committal type of review one can write). And then the second half of the episode happened.

All of a sudden things started occurring. The episode didn’t further much of the overarching plot (not significantly at least), but “Who Goes There” has its own sort-of plot that the filmmakers are able to take steps to resolve by the episode’s end; threads that are introduced in this episode are also wrapped up by its conclusion. It is very refreshing, and it gives the show the kick in the butt that it needed.

A fair portion of the episode’s success can be attributed to Fukunaga (and editor Affonso Goncalves), who takes the opportunity to really show off (and I’m not just talking about the six minute one-shot toward the end). The editing in the second half is a lot more frenetic and disjointed, putting the viewer in a similar mindset to Cohle, who is about to put himself in a very precarious situation. The remainder of the episode is shot close-up and dirty; and when we get to that continuous take the tension starts to boil over. The shot has so many moving parts – literally and figuratively. There are dozens of characters in the scene, there is a helicopter, there are a bunch of effects, and then you add a camera operator into the mix. It is a triumph, and it is the first real indicator that the show is worthy of praise outside of it’s main cast (who are still performing lights-out). It is a perfect scene that props up a show that has had its fair share of flaws (and still does, really).

True Detective is one of those shows that gets better as it goes along. Every new episode is the best episode of the show. If Pizzolatto and Fukunaga can keep that pace up moving forward, taking more risks like the ones they took here, then we will definitely have witnessed something special by the time this thing wraps up.