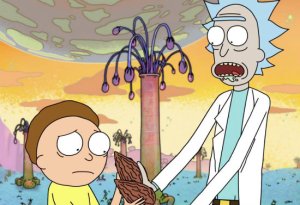 Back to the Future is my favorite movie. Ever. I’ve seen it innumerable times; I used to check the trilogy out from the library and watch the whole thing multiple times over the course of a weekend. Christopher Lloyd’s Doc Brown was a personal hero, Lea Thompson was an early crush (because Lorraine was my density), and Crispin Glover’s odd career trajectory (and odder personality) was endlessly fascinating. The sequels are both fine movies (Part III is better than Part II and I will refute any arguments claiming otherwise), but the short-lived cartoon is a real travesty. Luckily Dan Harmon and Justin Roiland have undertaken the job of correcting this injustice with their new Adult Swim series Rick and Morty.

The animated series follows the adventures of ever-drunk scientist Rick Sanchez (a Doc Brown homage voiced by Roiland) and his grandson Morty Smith (based on Michael J. Fox’s Marty McFly, and also voiced by Roiland) as they explore the the space/time continuum and alternate dimensions and all other sorts of scientific nonsense. The pilot episode finds Rick pulling Morty out of school to help him smuggle special seeds out of another dimension. Morty’s truancy forces his parents (voiced by Chris Parnell and Sarah Chalke) to reconsider whether Rick is the best role model for their son.

Just based on that description any real BTTF-head will be able to tell the series is not a direct translation of the trilogy. Nor is it trying to be. Clearly the Back to the Future riff was a jumping off point for Roiland and Harmon. What they have created is (as crazy as it is going to sound) a more realistic version of the great unexplained relationship at the center of the movies. Sure, the show is ridiculous and even less scientifically reasonable than a Deloreon time machine, but the interaction of the two main characters and the reactions of those around them are pretty much what you would expect in real life – no one really thinks it is a good idea.

The comedy of the show is a out there. It is more focused on absurdity and shock value than joke-jokes. Some of the more successful moments in the Pilot are populating the background (the accidental freezing-to-death of a bully, “Principal Vagina, no relation,” horse heart surgery). The more deliberate choices are more hit-and-miss; Morty’s speech pattern is clearly based on Michael J. Fox’s and that works, but Rick’s constant belching gets grating quickly. It is the type of show that could either live or die on the strength of its second episode, which I look forward to ingesting soon. One must wonder however, if my less than overjoyed response is based on a loyalty to characters that shouldn’t really apply here. Such an attitude just wouldn’t be fair to the show, which clearly wants to be its own animal.

It’s hard to separate the series from its inspiration, however. As we get closer and closer to next year’s 30th anniversary of the original film, Back to the Future will be on my mind more and more. I’ll start pricing flights to London to see the musical. I’ll be checking Deadline daily for an announcement of Part IV (surely if MJF can be in a sitcom he could play the patriarch to Doc Brown’s latest assistant). I may even buy one of those vests Marty was so fond of back in 1985. Rick and Morty may not fully satisfy my craving, but it certainly won’t hurt.

Oh and be on the lookout for the Cubs to beat Miami in the 2015 World Series. Place your bets now.