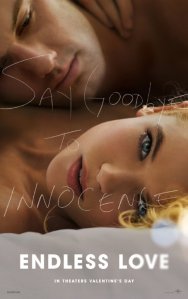 The remake is a common animal in the wilds of today’s film landscape (see: yesterday’s RoboCop review). A remake of an adaptation is a little more rare. I have neither read the book Endless Love is based on, nor have I seen the original movie. The only reason I saw it today is because I was bored this morning and it is shorter than Winter’s Tale. Well now I wish I had seen the one with the flying horse; at least that one looks ridiculous enough to be entertaining.

Endless Love is the story of two foolish teenagers (Alex Pettyfer and Gabriella Wilde) who quickly fall in love and each let all else be damned outside of the embrace of the other.

Perhaps my summary sounds cynical (okay, I know it sounds cynical) but it is tough to take a movie too seriously when its recent high school graduate protagonist begins lecturing a bunch of married adults about what love means. My reaction is actually exactly the one that the movie glances at askancely, but I cannot help it. Director/co-writer Shana Feste does herself no favors by pitting the rather lifeless Pettyfer against Bruce Greenwood, who is largely wasted in the film as Wilde’s disapproving father. The charisma deficit between the two men leads to Greenwood’s Hugh Butterfield being the much more interesting character – about halfway through the movie I hoped Hugh might kill Pettyfer’s David and become the movie’s focus, thus giving it an injection of interest.

The lack of energy is the film’s main problem (outside of mostly lackluster performances). The young couple at the film’s center have a believable amount of chemistry, but everything about their romance is incredibly dull. The feature’s few energetic moments come courtesy of Robert Patrick as David’s father and Dayo Okeniyi as David’s friend. Unfortunately neither actor is in the picture nearly enough to bring up the overall quality, but the one scene Greenwood and Patrick share is easily the high point of the movie.

Anne Butterfield (Joely Richardson) describes her daughter’s whirlwind romance with David as “inspiring,” and the filmmakers clearly intend it to come across that way, but the execution never quite meets this standard. There is a message buried in there somewhere about Wilde’s Jade discovering who she is outside of her father’s wishes; unfortunately it all happens in the context of her relationship with David. The film might be a little more inspiring if we could see her come into her own as a human being, and not just as a girlfriend.

Ironically, Endless Love will be completely forgotten in a month’s time. Whether or not Jade and David’s attempt at a mature relationship would be as long-lasting as the title suggests does not matter, because the film will not have a lasting effect on viewers as a whole. The film can be summarized in the moment where an 18-year-old girl says the line “let’s be young and dumb- just for tonight.” The characters think they are grown ups, and the movie itself thinks it is meaningful. Both perceptions are incorrect.