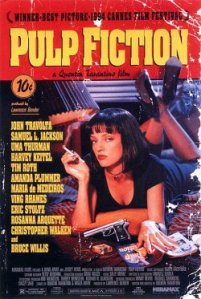 I couldn’t go to just one. After last month’s live reading of American Pie I was hooked, so when Jason Reitman (of Labor Day fame) announced this month’s reading would be Pulp Fiction by guest director Evan Goldberg (This Is the End), I knew I was in for a good time.

I find it difficult to review a live event such as this one, but I’ll do my damnedest here. Let me start by listing the great cast:

There’s a lot of what you would expect there; you’ve got your Seths Rogen, you’ve got your Jonahs Hill. You’ve even got your Josephs Gordon-Levitt, which was a bit of a surprise. Then you have the coup de grâce: Wendell Pierce. Bunk Moreland playing Marsellus Wallace? Yes please.

Pierce and the rest of the cast are all great, but I think I might list the biggest surprises. First was Nick Kroll, who gets the smallest role, but manages to supplement it with tiny two- or three-line parts throughout the script. He gave each character a distinct voice, and his line readings were exceptionally funny. The other standout was Rogen, who has the unenviable task of saying the n-word several times throughout the script. He sold it though, and his performance as Lance was so effortlessly manic that I was really impressed. In all of my efforts to distance myself from him resemblance-wise, I forgot how strong his acting skills are. It made me wonder when someone will give him a shot at solid drama work like they have with his frequent collaborator Jonah Hill.

Speaking of Hill, let’s take a second to chat. Jonah- you’re a good actor, we’re all ready to acknowledge that at this point, but you’re taking yourself too seriously. Did you see how everyone around you was having fun tonight, while you were trying so hard to act that it seemed like a chore? Cut it out dude. This wasn’t an audition. Sure JGL is going to deliver a stoic, quiet performance, but that’s because that is really all he does. You have the ability to do more; spread your wings, man.

Sorry, just had to talk to my buddy real quick.

The whole Live Read endeavor is meant to bring attention to the actual paper scripts of these classic movies we all love. Mission accomplished, Mr. Reitman. It has probably been 10 years since I last saw Pulp Fiction, which is a real shame. This event reminded me of how sharp that script is, but one of the most entertaining aspects of the show was hearing Goldberg read Tarantino’s nerdy action narration. This Quentin guy is a real talent; he probably has a future. Anyway, feel jealous out-of-towners. Those Angelinos who are reading, start thinking about how you can bribe me for attendance consideration next time.