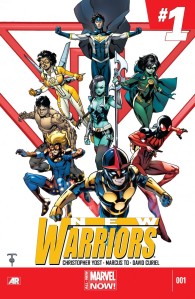 Comics began as (and are still considered by many to be) a kid’s medium. In the United States there is a level of stigma that comes with reading comics. I’ve experienced it, even at the high school where I work; students will try to make fun of me for it, until they realize I feel no shame about being a comics reader. That kind of comfort comes with knowing you’re supporting a quality product. I’m always interested to see if a new “kid-friendly” book, like Marvel’s New Warriors, lives up to that classification.

The New Warriors have been a team in the context of the greater Marvel Universe for years. Then several years back they were used as fodder to instigate a “civil war” between the heroes, in what would be the beginning of several years of “dark” stories that we are only now coming out of. With this new age of Marvel comes a new team of New Warriors, led by former teammates Justice and Speedball. The two men look to be joined by Scarlet Spider (a literal clone of Spider-Man), Hummingbird (Scarlet Spider’s partner, I guess), Sun Girl (still a bit of a cipher at the moment), Faira Sar Namora (a blue-skinned Atlantean), and Nova (star of, funnily enough, the Nova comic).

This issue is early goings, so the team isn’t even fully formed yet. Right now we are seeing a few disparate sets of heroes interacting with the servants of a character called The High Evolutionary, who seems to be filling the role of antagonist. I’ll be honest, as expansive as my knowledge of Marvel Comics is, the New Warriors are a pretty large blind spot. I am familiar with characters like Justice and Speedball through their appearances in books like Avengers Academy, but any references to previous antics are lost on me. Likewise with The High Evolutionary. I am entering this experiences nearly-blind, so it is interesting to see how accessible this comic is.

I say “nearly-blind” because I am quite familiar with Nova aka Sam Alexander. The Nova series has been a refuge for fun, teenage superheroing over the last year. It has been the best Spider-Man book on the stands since it debuted, and the wall crawler is not even in it (it doesn’t hurt that Peter Parker has not exactly been himself lately). Nova is a great example of an entertaining comic that is safe for all ages. So when Marvel announced Sam would feature in the new New Warriors series, I was excited for more of the same.

That’s not quite what we got. The book opens with a surprisingly bloody murder, which – while not nearly as graphic as anything going on in a DC Comic – is pretty shocking for a teen team book. But we also have to ask ourselves how old these characters really are. Justice and Speedball are drawn to look like they are in their mid to late teens (clearly a mandate along the company line, as that’s how both characters looked in Nova as well), but they have to be in their 20s; Justice was engaged to be married at one point, for god’s sake. But compare this to Kaine, the Peter Parker clone, who actually looks like a man, but is hanging out with a young woman who could be anywhere from thirteen to 30. As far as the brand new characters are concerned, I have absolutely no idea how old we are expected to believe they are. I guess I’m asking for an age chart, although this is the kind of thing writer Christopher Yost should be able to convey without being so specific.

I don’t want to come off as targeting Marcus To’s art too much, as I don’t think the character designs are entirely his doing. And in fact the action is pretty well-rendered. I’m just a little confused as to who and what the characters are at this point. Is this even supposed to be an all-ages book?

Marvel has gone to great lengths to make their entire line easy to follow. For the most part, New Warriors succeeds at that particular endeavor. I have a feel for all of the characters, and even though I’m not entirely clear on what The High Evolutionary wants, I am willing to find out. Unfortunately the execution is lacking at points, so while the first issue may be enough for me, I don’t necessarily recommend it to everyone. Let’s hold off a couple more issue and see where this thing goes.