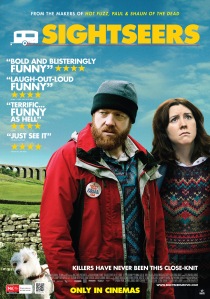 Any relationship, whether friendly or romantic, progresses along roughly the same path. Things start off strong – something that has come to be called the “honeymoon period” (so-named for the 1986 film Haunted Honeymoon, starring Gene Wilder and Gilda Radner). This is the exciting time when partners are still discovering things about each other and how they fit together. This indeterminate length of time is characterized by passion and happiness, but it cannot last forever. Eventually all of the good surprises are out in the open, and all that reamins are the less-than-savory details. Ben Wheatley’s 2012 film Sightseers follows a couple (Alice Lowe and Steve Oram) as they dive into this phase of their relationship during a holiday getaway.

Tina (Lowe) and Chris (Oram) are both quickly approaching middle age, without much to show for the hard work they’ve put into life. There is a desperation to their relationship, but as the film opens they really seem to care for each other. The vacational endeavor they have undertaken will either strengthen that playful joy, or tear it to pieces. The film is an honest portrayal of how the feelings these two people have for each other change as more and more aspects of each individual’s respective personality is revealed to the other. The narrative seeks to discover if the three-month-old pairing can survive this experience.

Oh I may have neglected to mention an important aspect of the film: Chris and Tina are crazy murderers.

Sorry, don’t know how that slipped my mind. Revealing the film’s sociopathic overtone isn’t quite a spoiler, as it is the event that kicks the story into high gear. The film does do a good job of slowly (relatively) introducing these not-quite-sane impulses into its presentation of the characters, so we learn these things about Chris and Tina as they learn them about each other.

Chris and Tina are really well-developed characters. A fair amount of this praise goes to Oram and Lowe, the film’s credited screenwriters along with Amy Jump. But Wheatley deserves his propers as well, managing to make the most boring vacation ever (Chris and Tina plan visits to museums dedicated to streetcars and pencils) look beautiful. Sightseers also has a wicked sense of humor, which makes some of the less-palatable moments easier to swallow.

There are very visceral scenes of violence throughout the movie – as you might expect from the subject matter. And the film isn’t very interested in condemning its main characters for their actions. The filmmakers are way more concerned with finding out what effect these actions have on the fledgling romance. This flippant treatment of such horrifying subject matter may be enough to turn off some viewers, especially as the gory bits do not seem to serve any deeper meaning outside of dehumanizing the protagonists.

But this dehumanization is juxtaposed with how real the relationship is played. The violence is an afterthought in Sightseers, making it feel like a rom-com from an alternate dimension. Despite The monstrousness of Tina and Chris, their emotional arc contains beats that anyone will be able to identify with. Maybe that is the scariest part of the whole picture – we self-proclaimed “sanies” aren’t so different from these nutsos on display.