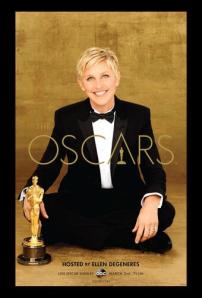 And so ends awards season. It was a long one (isn’t it always?), and it was populated by movies and performances that all seemed especially deserving. The biggest surprise, though? The fact that the 86th Academy Awards was actually an earnest and entertaining dedication to the year in film.

Ellen DeGeneres was suitably charming in the role of host. I can be counted among the few who actually cared for Seth MacFarlane’s shot at the gig last year, but there was a pretty big backlash to it among various communities who found themselves offended for various reasons. Ellen proved to be a good compromise between the reverence the producers clearly want to cultivate and the off-the-cuff approach that makes the show watchable. The pre-written material was pretty stale, but Ellen sold it with her charisma. And the parts of the show where she just riffed (the selfie, the pizza) might have been obnoxious, but I would be lying if I said they didn’t put a smile on my face. The stars! They’re just like us.

Let’s get to the awards. For the most part they went to appropriate parties (aside from a couple Dallas Buyers Club-sized wins that we should all have resigned ourselves to by now). Here’s a rundown, including who should have won, and who I predicted in the event I was incorrect.

This is one of the outcomes I had come to accept a while back. It doesn’t sting so much anymore, but I do wonder if any voters regretted their decision when Leto gave a shout-out to his band. Fun note: this was my mom’s favorite performance of the year, despite the fact that she hasn’t seen the movie.

I don’t really know much about this field, but I know the costumes were pretty great in 12 Years, just not showy enough for the Academy.

Sure, Lee and Mathews did a great job making attractive people look gaunt and near death, but Prouty had to convince real people that Johnny Knoxville was an old man. Which is more impressive? Plus, I want to be able to describe the Jackass empire as “Academy Award winning.”

I didn’t get a chance to see any of the shorts this year, so I won’t have an opinion on who should have won. Mr. Hublot works for me, mainly because we got to hear a Frenchman speak funny. America!

Frozen is not bad by any means (though it lacks in the character development department), but The Wind Rises is so good, and it is about so much. It is in theaters now and I encourage everyone to check it out.

The first time Oscar and I were in agreement. Because there is no way this award was going to anyone else.

Again, no opinion on the shorts, though I will say Helium sounds about right because: cancer. I am looking forward to watching The Voorman Problem because apparently I am a Martin Freeman completist.

If there’s one thing more bait-y than cancer it is holocaust. In all seriousness, though, I’m sure this is an amazing little doc, and I look forward to watching it sometime soon.

This was the big mistake of the night. I have not yet seen 20 Feet, but The Act of Killing is just such an important feature. It’s on Netflix right now. Please go watch it, but be warned: it is not for the faint of heart (recommending this film to a young woman directly led to us never going on another date).

The Great Beauty is an amazingly visual film, and that alone is noteworthy, but The Broken Circle Breakdown tore me apart emotionally and featured great music. Shout out also to The Hunt, which will make you never want to be alone in a room with a child again.

Again I had no opinions or predictions in these categories, mainly because I have never been clear on the distinction (spoiler alert: that distinction didn’t really matter this year). From what I can tell this award is for the finished sound as a whole…

…and this one is for the sounds themselves. I could be wrong (and I probably am!), but abstaining in these categories really hurts my prediction percentage. Thanks a lot, sound.

Another perfect choice by the Acdemy. Nyong’o is amazing in 12 Years, and I look forward to seeing her repeat next year for her role in last week’s Non-Stop.

I championed Inside Llewyn Davis because it looks great, but so does Gravity. I predicted Gravity because no one was stopping that freight train.

This was the only trophy that I thought American Hustle actually deserved. No dice, instead it ended up being my first real miss of the night. Still I made it pretty deep without a whiff (I count those categories I abstained from as foul tips in the grand baseball metaphor).

Oof. Two strikes in a row; Another award that I thought American Hustle had a legitimate shot at, though I was hoping that Her would pull off the upset (seriously the design aesthetic of that movie is perfect). In hindsight I should have known better because: ’20s parties.

I’m not sure why I chose Gravity to win this one. To be honest, none of the nominees really stuck with me this year. I think I chose Her as most deserving because I’m in love with that movie, rather than the score.

Sure “The Moon Song” is melancholy and lovely, but “Let It Go” is a juggernaut that cannot and will not be stopped. The performances of all four nominees were excellent tonight (though at times Adele Nazeem was a little pitchy), which was nice to see, but who doesn’t want to watch a man become an EGOT? I wouldn’t deny that honor to anyone. Congratulations Mr. Lopez.

That’s about right. What’s up with that tension between Ridley and 12 Years director Steve McQueen? Seriously, go back and watch: Ridley blows right past McQueen, and McQueen gives the man fingertip claps. Guys, you made a great movie. Let’s squash this beef.

At times it felt like this was the only award that really mattered, and I’m so happy for Jonze. He wrote the best movie of the year, and it deserves as much recognition as it can get. I can’t wait to see what he creates next. Plus, someone connected to Jackass actually managed to win an Osacr tonight.

This was just a straight up no brainier. Probably no other director worked as hard this year (maybe this decade). There were so many moving parts to this behemoth. You knew it was going to happen when they cut off Cuarón during the best editing acceptance speech.

Come on. Who didn’t see this coming. Really interesting to hear the Woody shout out. Can’t wait to read Mia Farrow’s response (/sarcasm).

My mourning period for Ejiofor’s stillborn Oscar victory has been in effect for a while, but it is still sad to see it happen for real. Regardless, McConaughey delivered an entertaining speech (though I don’t think Rust Cohle would have approved of all that God stuff) and said that thing that he says. Maybe I should give Dallas Buyers Club another watch; it is not a great movie, but there is definitely something to McConaughey’s performance.

At no point did I ever expect Her to win, so the second best movie of the year would have to do. The juxtaposition between Steve McQueen talking about the horrors of slavery and then jumping up and down on stage immediately after was the perfect way to end this thing. And I only got two predictions outright wrong! I’m so smart!

Appropriate results for the most part. Even if a category didn’t go the way it should have I a perfect world, the next best thing happened (see: Best Foreign Film, Best Picture, Best Animated Feature, etc.).

One of the biggest surprise for me was the shutout of American Hustle. It makes sense; I liked the film, but it paled in comparison to other nominees in most categories. And then the other pleasant shock was how honest and inspiring the speeches were. It was nice to see the conductor lay off the baton when speeches started going a little long. We all know the ceremony is going to be long, so why not actually let the artists say what they want to say (plus 3.5 hours really isn’t too bad; could have been worse).

This year’s Academy Awards were a success in more ways than one. I exited the experience feeling pretty positive about the whole thing. What’s more, I left the living room wanting to re-watch some of these amazing films, which is never a bad thing. Good work Oscar (and good work Ellen). Next year in Jerusalem.