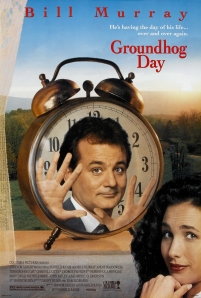 Tonight Jason Reitman returned to LACMA’s Bing Theater stage and to the project he created, and so did I. After several months of guest directors Reitman came back for a reading of Groundhog Day, in honor of the late Harold Ramis, a man Reitman’s father knew quite well.

I revisited Groundhog Day myself earlier this month after Ramis passed. It had been a long time since I had seen the movie, but I was struck by how emotionally resonant it was, and how strong Bill Murray’s performance as local weatherman Phil Connors continues to be 20 years later. For those who somehow do not know, Groundhog Day follows Connors as he repeats the same day (Groundhog Day, in fact) over and over. Connors goes through various iterations of the day, trying to get things right and hopefully woo his producer, Rita (Andie MacDowell).

It is a great movie; Ramis’ best, and perhaps Murray’s as well. That is quite a legacy to live up to, so in an effort to do something creative Reitman chose to put up an earlier version of the script, with innumerable tiny changes and a couple big ones. Joining him on this journey were Jason Bateman in the Murray role, Elizabeth Reaser in the MacDowell role, Jeffrey Ross as Larry (originated by Chris Elliot), Mae Whitman as Nancy (originated by Marita Geraghty), and Stephen Tonolowsky as Ned Ryerson (originated by… Stephen Tobolowsky).

The cast performed admirably, but there is just no way to outdo the original performers (except maybe MacDowell). The reading did cement the idea of Bateman being the natural charismatic successor to Murray; they truck in such similar levels of smugness and sarcasm. Bateman still managed to bring his own emotion to some of the heavier scenes, lending an air of homage, rather than mimicry.

The differences in the script were really interesting. There were some things that I actually wish could have held over to the final film, including earlier introductions of some of the repeated motifs. Some things though are much better the way they are. One of the most striking aspects of the film is that we never find out how long Phil has been repeating Groundhog Day, but we are left with the impression that it has been a long time. The original script is a little more explicit, first at the magnitude of years and increasing from there. The final number that we get is so outrageously large that it kind of undermines the intended epic effect. Just some proof that rewrites really work, I guess.

This Live Read was excellently entertaining. It functioned as a perfect tribute to Ramis, a voice we will all miss. All we can do is take away the message Ramis intended the film to impart: cherish whatever time you have, because that is all you are going to get.