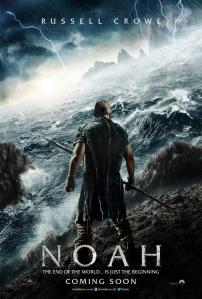 Darren Aronofsky’s controversial new movie Noah is an account of the famous story in which God decides to drown the world in a flood, leaving the responsibility of saving whatever possible to the titular character (Russell Crowe). The movie plays on some of Aronofsky’s visual strengths, but the script, co-written by Ari Handel, comes up empty where the characters are concerned.

I am a huge fan of mythology and fantasy, so a movie based on any story from the Old Testament is bound to check some of those boxes, whether you believe in the text or not. Aronofsky takes the opportunity to play around with the Book of Genesis serveral times throughout the film, in scenes depicting the transgression of Cain, the fall of the angels, and – in the movie’s best sequence – creation itself. These moments are so engaging and meaningful, that the rest of the movie pales in comparison.

Crowe makes a fine Noah, unfortunately Noah just is not an interesting character. For the most part he follows instructions, which is boring. Aronofsky and Handel make efforts to remedy this in the last act of their script, but it is too late; at that point, after an hour and a half, it does not quite ring true. The only actor with an interesting character arc to play is Logan Lerman (at his most Yelchin-ian) as Noah’s middle son Ham. Ham’s budding adolescence in the midst of these cosmic events lends a realism to the picture, but the payoff to that story is incredibly weak. The rest of the cast, including Ray Winstone as Tubal-cain (not Mickey Rourke as I believed up until the closing credits), Jennifer Connelly as Noah’s wife Nammeh (finally gettinge the A Beautiful Mind band back together), Emma Watson as Noah’s adopted daughter Ila, and Anthony Hopkins as Methuselah, are incredibly one-note.

Despite all of this, the movie still manages to be beautiful. Aronofsky’s sensibilities come through, even when the movie is a straightforward family drama or a sub-par action flick. Credit goes to frequent Aronofsky collaborator and director of photography Matthew Libatique, and to Mark Friedberg, whose production design aesthetics from films like The Life Aquatic with Steve Zissou are recognizable in the movies better segments.

Apart from the more abstract stretches, the movie really succeeds in its evocative portrayals of the state of humanity. In this way, you are able to understand why the character of God (or The Creator as he/she is credited in this movie) does the things he/she does. It is just too bad that the only character with clear motivations never actually appears in the movie. Noah is visually arresting, but its weak characterizations (and excessive runtime) prevent it from achieving transcendence.