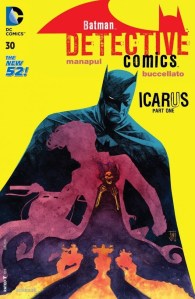 It is rare these days for me to read a DC comic book. During my high school years I got really into DC – almost exclusively. This was the beginning of the Geoff Johns era, when Johns was creatively fresh, but was not yet free to do whatever the hell he wanted with the entire universe. This was the time of the Crisis resurgence, when history was such an important pat of the line. DC was always built on its legacy, which stretches back to the ’30s, save a reboot or two. The editors at the top of the pyramid really turned me off a few years ago when they re-started their universe yet again, in an effort to court a teen audience that may not really exist. I have been back and forth with a couple titles since, but the arrival of Francis Manapul and Brian Buccellato on Detective Comics is enough to get me to check the title out.

Manapul and Buccellato are hot off of a well-received run on The Flash. I poked my head in from time to time, and my main takeaway was always Manapul’s great art, which is inspiring in its ability to convey the character’s speed. That sense of kineticism is perfect for The Flash, but it is not necessarily an obvious fit for a book like Detective Comics, which is traditionally dedicated to Batman.

The question becomes whether the Manapul and Buccellato’s tenure on the book will be an action-fest or a mystery book. The best example of a successful run on the book in recent years was Paul Dini’s. Dini crafted a run that mainly consisted of standalone issues, each one a self-contained mystery for the Dark Knight to solve. That is an aspect of the character that often gets forgotten: He is a detective. The Arkham games have embraced this, even if the movies have not.

This issue does a lot of set-up for the new story-arc, titled “Icarus.” That name is not only a reference to the mythic story of the young man with wax wings who flew a little too close to the sun – it is also the name of a brand new fictional drug working its way through Gotham City. The imaginary drug trope is really tired, from RoboCop 3 to last year’s Dredd, fake drugs are all over the place. So far there is nothing to separate Icarus from the Nukes or Slo-Mos of the world. It is just another generic “drug.” It is being run by a drug lord named The Squid, who feeds his enemies to – get this – a squid.

So the story is not off to a great start just yet. But there are bright spots. Manapul’s art continues to look great, brought to life by Buccellato’s coloring. He finds ways to infuse speed into the story, despite the lack of a character who runs really fast. And the most promising development is the establishment of a real mystery at the issue’s conclusion. It remains to be seen how Manapul and Buccellato handle this development in coming issues, but the things that worked in the issue give me hope.