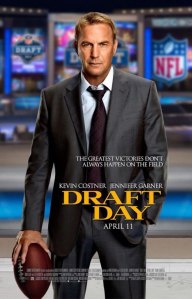 While everyone has been distracted by the McConaissnce, there has been another career revival going on that very few people have been following. Dubbed the Costnergence by Matt Singer over at The Dissolve, Kevin Costner’s career as of late has been quite busy, after several years of near-silence. It all kicked off with Costner’s turn as Jonathan “Pa” Kent in Man of Steel, but has already been followed by three movies in this still-young year: Jack Ryan: Shadow Recruit, 3 Days to Kill, and this week’s Draft Day. I’m not even a fan of Costner (I’m more of a Dennis Quaid guy – where’s my rejuviQuaidtion?), but here I am, a viewer of all of these movies. None of them are going to recontextualize Costner the way Mud and True Detective have for McConaughey, but that doesn’t that mean none of them are worth your time. Draft Day, in fact, could almost be described as “good.”

The film – directed by Ivan Reitman and written by Scott Rothman and Rajiv Joseph – follows fictional Cleveland Browns General Manager Sonny Weaver Jr. (Costner) on the titular day, as he finds himself confronted with the first pick of the draft, something he has not been planning for. Sonny has to deal with pressure from his boss (Frank Langella), his team’s coach (Denis Leary), his mother (Ellen Burstyn), various would-be Browns, and his secret lover (Jennifer Garner) – who has some news of her own.

Draft Day is clearly influenced by the insider perspective of Moneyball. It takes some good lessons away from that movie, but the script by Rothman and Joseph is not nearly as engaging as Aaron Sorkin and Steven Zaillian’s was. Draft Day is the same kind of comedy-tinted drama Joseph has written previously for Nurse Jackie, and while a few of the jokes really hit, the overly dramatic moments do not.

I hesitate to lay that all at the feet of Rothman and Joseph; most of those dramatic moments come courtesy of Costner and Garner, neither of whom is the most versatile actor. Luckily the supporting cast is around to lend a hand, particularly Leary in a role that could easily be instantly unlikable. The film’s other MVP (heh, sports) is Chadwick Boseman as one of the potential draftees. Boseman (who surprisingly receives the coveted “and” modifier in the end credits, even after Ellen Burstyn) manages to craft a complete character in what might add up to 10 minutes of screentime, consisting mostly of phone calls.

There are a lot of phone calls in the movie, as you might expect from a picture about executives in different cities trying to wheel and deal. Reitman uses some really creative split screen mechanics to keep these scenes from being boring, but that is the extent of the director’s innovation. It is quite disappointing, actually – how little Reitman brings to the movie.

But making an interesting movie about white guys haggling over the phone is no small accomplishment. The movie really only works because it is an interesting piece about office politics on a grand scale. The more personal moments are failing, but the business end of things makes up for that. That and a few key performances. Unfortunately Costner’s performance is not one of them. And that is why the Costnergence will never be truly successful. Even in bad movies (like Dallas Buyers Club), Matthew McConaughey is good; Draft Day manages to entertain despite its star.