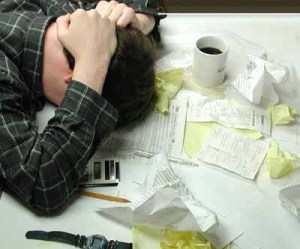 Nothing is certain but death and taxes. I’m pretty sure I just came up with that.

Here we are on the eve of tax day 2014 (also the first night of Passover, for all my Jews). I hope everyone has prepared for the ultimate eventuality. Because if you don’t pay Uncle Sam tomorrow, you will be thrown in jail faster than Wesley Snipes (he’s a celebrity so the process was pretty slow, although not as slow as the process on Nicolas Cage, another famous WHITE celebrity with some tax troubles. Hmmm).

If you are unaware, you must file both federal and state taxes. And, if you have a job that is in any way more complicated than showing up at a location, signing in, signing out, and collecting a paycheck, you will have to do a hell of a lot more work that I cannot help you with in any way, shape, or form.

Look guys, cards on the table – I didn’t even do my taxes by myself (never have, never will). My mom helped me immensely. I blame it on my high school for not preparing me for the realities of life. Luckily Mother is there to catch everything that falls out of my pockets on a daily basis, including w-2s and tax forms. Sometimes this financial stuff means nothing to me. I mean, what’s a routing number????

It is high time I buy a book or take a class or something, though, because my ignorance is putting me in a tough spot. Turns out if you try to keep the meddling government from withholding money from your paycheck, they will find a way get at it anyway. Apparently in Brack Obama’s America I have to pay the government all of the money that I didn’t let them take from me the first time around. Doesn’t our sneaky president realize that I am one of the poor people he claims to care about? That’s it, starting tomorrow I vote down the ticket Republican. Now there’s a strong group of white men who really care about the little guy and what he has to put up with!

Please, keep me in your thoughts tomorrow, as you munch on your matzah bread and drop your tax return off in a mailbox because you are 80 and don’t realize that you can do most of this online now. “Online? What’s that?” you’ll say to your grandchild, since you are a stereotype, mostly modeled after the “Where’s the beef?” lady. “Nothing, grandma,” your grandson will say, rolling his eyes at your antiquated ways. And as he puts on his backwards baseball cap and skateboards away you will tsk-tsk, because he is going to go eat chametz in the form of bread or pasta or something. He didn’t even have the decency to come to Seder last night. His parents said he was sick, but you know better. He was probably making sex with that girl he’s been dating. You know, the shiksa whose father spraypainted slurs on the synagogue when he was younger. Oh sure, he claims to have changed his ways, but you’ll never forget the look in his eyes when you testified against him at the trial. He’ll never change. No one ever does. It’s not true what they say, about nothing being certain but death and taxes. But thank god that sweet, sweet death is coming, because this world has passed you by, and you’re not even getting a return this year. What a bummer.