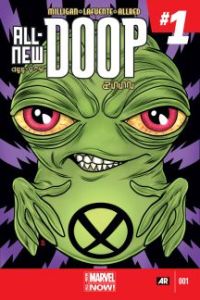 That’s Doop. That guy. The one that looks like Slimer from Ghostbusters. Doop was created by Peter Milligan and Mike Allred, and debuted in X-Force (1991) #116 as the cameraman for a reality show about a team of mutants. Doop has a mysterious origin and speaks in a language only he can understand (and any reader with access to a DoopSpeak Translator). Doop recently appeared as a behind the scenes force in Jason Aaron’s Wolverine and the X-Men (2011). But now, Doop is front and center in his very own title, written by his creator, Milligan, and drawn by David Lafuente. This is All-New Doop. Doop.

If you were not already aware, it becomes clear early in the issue that this is mostly a comedic story. Doop is a funny character, and Milligan knows how to use that effectively. This issue takes the Rosencrantz and Guildenstern Are Dead-ness of Doop’s current role at the Jean Grey School, and combines it with artistic cinematographer Doop from X-Force and X-Statix. Most of the issue takes place in the periphery of the early issues of the recent Battle of the Atom crossover, in which X-Men from the future came to the present to send X-Men from the past back to the past. It’s complicated, but that story really has no bearing on All-New Doop, aside from providing a starting block. Doop dances between the panels of the crossover (sometimes literally) shooting the whole thing, like an over-zealous director. That’s how Milligan describes the character in his on-the-page narration, and Doop himself makes several references to the career of Ingmar Bergman in DoopSpeak throughout the issue. This tickled me immensely, but it is all leading to a purpose – the real story that Doop wants to tell. The nature of that story is telegraphed through the issue, but it still pays off rather well by the end, including a twist that has me eager for the second issue.

Milligan created Doop and was his sole writer for many years, so he obviously has a grasp on the green blob’s characterization. The scripting is very strong – it is a great sign when your comic works whether or not you can understand the things the main character is saying. Lafuente’s art is adequate. Anyone who draws Doop these days will invariably be compared to Mike Allred, whose distinct art style is almost universally praised. Lafuente manages to make Doop work with his own unique style popularized in Ultimate Spider-Man thanks to the color work of Laura Allred (Mike’s wife, though still her own human being). Laura Allred utilizes the same muted palette she uses for her husband’s art, evoking his art despite the clear differences between Mike Allred and Lafuente.

There’s just not much else to say about All-New Doop. I liked it a lot. Funny comics are every hard to pull off, but Milligan and Lafuente do just that, without being too jokey. I have no idea where All-New Doop goes from here, but I am more than willing to find out.