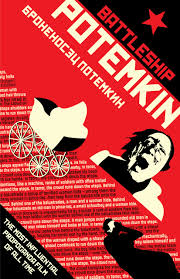 Wow, after an extended absence from Roger Ebert’s The Great Movies, we’re diving back in without much hesitation. And fancy that, we have finally made our way into the “B’s” with Sergei Eisenstein’s 1925 silent film Battleship Potemkin.

When people think about silent film these days the first thing that comes to their mind are the comedies. Specifically those of Charlie Chaplin, Buster Keaton, and (my personal favorite of the three) Harold Lloyd. Those certainly seem to be the silents that have stood the test of time; in fact, I watched Chaplin’s The Gold Rush and Keaton’s Sherlock Jr. just the other day. But there were plenty of dramas popping up in the pre-sound era as well. Hitchcock got his start in silent films in the 20’s, and those certainly weren’t comedies.

Sergei Eisenstein was an innovator in the form, and Battleship Potemkin shows that in spades. The film is full of gazing shots and quick cuts that (based on my very limited experience) were a bit of a novelty at the time. But let’s back up. The film is based on a true story, about the rebellion of the enlisted men aboard the Potemkin against the well-to-do officers forcing them to work tirelessly under very poor conditions, including extremely cramped quarters and unsanitary food. As their complaints become more and varied, the officers threaten to take violent action, causing sailor Grigory Vakulinchuk (Aleksandr Antonov) to lead a mutiny. What ensues is a call to arms for both the military and the oppressed peoples of Russia against those who would do them harm.

Eisenstein developments a lot of tension in the film through quick cuts, specifically in the mutiny scene, in the famous Odessa steps sequence, and in the final standoff. He gives us a sense of what every single person involved in these events is doing. This greatly helps us to identify with them.

That is a tall order in the film, because there is no real character development to speak of – it’s a propaganda film, after all. Vakulinchuk is the character we get to know the best, but whatever we know about him is cursory at best. Luckily Eisenstein was able to find the most effective emoters in the massive swaths of extras he worked with, allowing them to evoke some emotion in us as well.

The silent comedies are – in retrospect – easy. Each of the three greats had a pre-established character that audiences were familiar with, so there was less of a learning curve when it came to getting the viewers on board. Sergei Eisenstein and those of his ilk had a much tougher row to hoe with their movies. Film has come a long way in the almost 90 years since Battleship Potemkin, but the influences it has had, and its greater importance to the industry, cannot be denied.