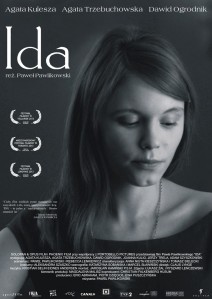 You’ve got to be careful when you title your motion picture. Producers in the American studio system are sticklers for this kind of thing; they want your movie’s title to catch the attention of as many audience members as possible (they also want to be able to get that lucrative “.com” domain, but sometimes it just isn’t possible). But foreign imports don’t get as much consideration, often taking a title that is actually representative of the film itself. Such is the case with Ida, a Polish picture directed by Pawel Pawlikowski. Ida doesn’t even show up on the first page of Google search results, but that is oddly apt for a film that explores the mysteries of the unknown.

The pitch would sound like a comedy to most: a young nun (Agata Trzebuchowska) who grew up in a convent as an orphan must visit with her aunt (Agata Kulesza) before she will be allowed to take her vows. After learning that she was born Jewish, Anna (Trzebuchowska) hits the post-World War II Polish road with Wanda (Kulesza) in search of the truth about what happened to Anna’s (originally Ida’s) parents. It’s exactly like Thelma and Louise with more God stuff! Well, maybe not “exactly.”

For a little while Pawlikowksi and co-writer Rebecca Lenkiewicz do inject a little lightness into the film. Most of this humor comes courtesy of Wanda, who is hardened and relatively no-nonsense. Anna’s appearance has softened her a bit, but the combination of alcohol and the lies that arise during their search, brings the beast back out. Wanda uses drink and sex to cover a trauma in her past, and Kulesza plays this all excellently, with an air of inscrutable dynamism, that lends the character a lot of unexpected weight as the film proceeds.

It is in that very procession, though, where Ida falters. Wanda slowly becomes less and less an integral presence in the film, and it suffers for it. Trzebuchowska is not a bad actress by any means, but she doesn’t have enough of Kulesza’s charisma to pretty much carry the final act.

It is here where the movie becomes the rote identity crisis film that it clearly wants to be throughout. Wanda is constantly pushing Anna in that direction – trying to make her uncomfortable at various moments. Anna is clearly tempted, though she resists said temptation for a long stretch. That resistance seemingly implied that Ida would go somewhere unexpected with this idea, but ultimately Pawlikowski and Lenkiewicz do not.

The cinematography actually does a better job of conveying this sense of crisis better than the script does. Lukasz Zal’s camera places the actors in different parts of the frame depending on that character’s confidence at the time. Early in the picture Anna takes up very little space in frame, leaving plenty of room for antiquated Polish architecture, but when Wanda appears she dominates the composition, often filling the screen. Over the course of the film, as Wanda starts to rub off on her niece, Anna also becomes larger in the frame. Each woman’s self-assurance is plain in their proportion to the screen as the movie continues. It is certainly an interesting technique.

As is the lack of score for the film. There is no music by a traditional orchestra, but music plays a large role in the picture – often as a metaphor for Anna’s concealed desire to experience the world. This concept is manifested quite literally in the form of Dawid Ogrondnik as Lis, a saxophone player in a jazz band. Lis’s purpose in Ida is clear from the second he arrives on stage, but the music he and the rest of the band produce is worth it.

Ida is not a subtle picture – aside from a couple underplayed moments that really work – but there is a lot of heart behind the scenes. Anna/Ida may not be the most interesting character, but Trzebuchowska’s wide eyes help sell Anna’s emotions and doubt. The film tackles several subjects, and while it doesn’t handle any of them perfectly, Ida at least does justice to the underlying issues. The feature definitely earns a net positive, perhaps even more for its sheer entertainment value in the early goings. It is enough to keep one interested throughout the rest of the movie, even if the script is not.