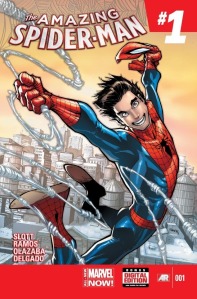 A little over a year ago Peter Parker died. It was a very sad day, but after 700 issues of Amazing Spider-Man, one of his rogues finally got the better of the titular hero. Doctor Otto “Octopus” Octavius found a way to switch bodies with the wall-crawler, inhabiting Peter’s form before killing off his own ailing shell with Peter’s mind inside. Thus began a new era of web-slinging, as Doc Ock became a hero himself, hoping to prove he could be a superior Spider-Man in a book appropriately dubbed Superior Spider-Man. But now – just in time for the release of The Amazing Spider-Man 2 – Peter has triumphantly returned to his own assemblage of skin, muscle, and bones. Let’s hope this effort is more successful than that of his cinematic counterpart.

I did not read most of Superior Spider-Man. A good number of people chose to boycott that book, as if Marvel had really killed Peter off for good. I was not so convinced. The main reason I wasn’t reading was because the book just wasn’t as fun Spider-Man could and should be. The few issues I did read had an interesting enough story, but Otto couldn’t hold my interest the way his old nemesis did. But when Marvel announced the impending return of Peter Parker I knew I was going to have to pick it up.

The issue is written by Dan Slott, who has been writing Spider-Man for a while: before, during, and now after Superior. Slott is an entertaining writer, despite how some readers felt about the direction the book took over the last year. Surely all of this has been planned, including the backlash Slott received when he claimed Peter’s death was permanent. He must have known at the time that Peter would have to be Spider-Man again by the time the movie came out. I didn’t sit through Superior, but I still think Slott is a clever, talented writer, and I’m very interested in at least one storyline he has planned for the near future.

This particular issue does not contain a whole lot of substance. It is mostly Peter getting back into the swing (hah) of things. Otto made a lot of changes to Peter’s life, but – as I mentioned in my review of Original Sin #0 – big sweeping changes like that tend to get righted pretty quickly. So all of those people in Peter’s life who thought he was acting weird (Avengers included) seem to have figured out that he is back to normal. Some things are still odd, like the presence of Otto’s girlfriend. – who happens to be a little person – but I expect those to be resolved soon. Even if they aren’t I have no problem with the slow burn. Slott is notorious for planning things out well into the future; why not let Peter simmer in his new status quo for a while?

Humberto Ramos has been drawing Spider-Man almost as long as Slott has been writing it, so he’s no rookie on this issue. His art takes a lot of liberties with realistic physics, but that only adds to the pace of his drawings. His characters are malleable and quick-footed, perfect for a Spider-Man book.

This is a packed issue; along with the 20 page main story there are six backups designed to both introduce aspects of the character to new readers, and to set the stage for what’s coming up in Spidey’s corner of the Marvel Universe. There is an Electro story (presumably to tie in the with movie), a Black Cat story (as she edges closer to villainy than ever before, thanks to Otto’s actions), a cartoony primer on Peter’s abilities, a story about Spider-Man 2099 (a version of Spider-Man from the future, currently stuck in the present) in preparation for his own series, a story about Kaine (an imperfect clone of Peter’s, who has recently joined the New Warriors), and a retelling of Spider-Man’a origin that attempts to make it modern while introducing a new character into the fold.

That revisionist history is big around Marvel Comics these days, mostly as a tie-in to Original Sin. Slott is actually messing with a couple aspects of Peter’s past, which is a dangerous line to tread. We’ll see how he pulls it off, though the final backup makes a couple anachronistic mistakes, mostly by trying to modernize the origin too much.

There’s a lot of bang for your buck in this issue. Unfortunately your “buck” ends up being closer to six bucks. As comics get more and more expensive, it becomes harder and harder to recommend them based on the price. The silver lining is that a lot of times books with this many pages would cost more than six dollars, but that is hardly good news.

The Amazing Spider-Man is a fun return to form for a character that people love, but if you aren’t already a fan, I think the high price point may be a little prohibitive. Still, if you’re willing to take a financial risk, I doubt you will be disappointed by what you get in return. Just be prepared to continue buying the series, because Slott is gonna do his darnedest to get you to do just that.