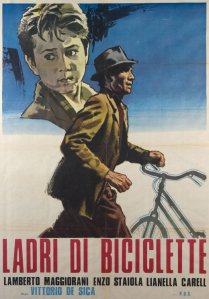 After a few weeks I return to Roger Ebert and his list of The Great Movies. The latest entry is Vittorio De Sica’s 1948 picture, The Bicycle Thief. I have been on a bit of an Italian cinema role after watching Il Sorpasso last night. The two movies are very different, but both act as tours of different parts of the country; Il Sorpasso shows us the country as lived in by the rich and free, while The Bicycle Thief acts as an accounting of Rome’s poorer districts, and the lengths people go to survive there.

Lamberto Maggiorani stars as Antonio Ricci, a down-on-his-luck husband and father searching for work in post-war Rome. Upon landing a job posting bills, Antonio and his wife, Maria (Lianella Carell), must sacrifice comfort so Antonio can retrieve his bicycle for the job. It is not long, however, before the bike is stolen, and Antonio and his young son, Bruno (Enzo Staiola), find themselves wandering Rome, looking for the culprits.

Surely Italy was not the best place to live after World War II, especially for those with no means. De Sica shows us a society with no concern for its poorer citizens. One that has no desire to help those it can’t support, but one that is more than willing to punish them all the same. It’s rotten position to be in, so when Antonio’s bike is stolen, there is a sense of the thieves doing what must be done to get by, much like Antonio is trying to do.

Unfortunately, the bike represents the Ricci family’s future. Antonio and Maria are at the end of their rope, and we can tell that neither adult has much left in the tank at this point. This conveyance is one of The Bicycle Thief‘s greatest triumphs. None of the actors portraying the members of the Ricci family were professional performers prior to production. De Sica discovered each, and they were cast in the interest of furthering the neo-realist movement. Despite lack of experience, each actor is excellent in his or her given role, especially Maggiorani, who manages to display grand emotion through facial expression alone.

“There’s nothing doing” is a phrase that is repeated throughout the film. It is as representative of Italy at the time  as it is of Antonio’s situation. The Bicycle Thief spends 90 minutes showing us the extent a man will go to protect his family. It’s not quite as far as one might expect to see in a modern film, but Bruno’s constant presence puts all of Antonio’s actions in stark perspective.

Roger Ebert called the film “The Bicycle Thief”, but the technical translation of the Italian title, Ladri di biciclette, is Bicycle Thieves. The latter title is a more apt description of the people who populate the feature. In a city where no one cares about the less-fortunate, they might as well all be thieves. No one bothers to tell the difference between those who try to live straight and those who break the rules; everyone blends into the crowd. In such a world, can Antonio maintain his integrity? Could you?