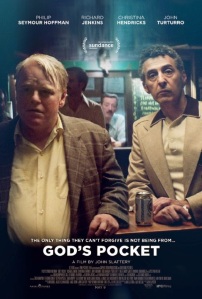 We go from what could be construed as a declaration of depression to a movie starring a man whose darkness ultimately got the better of him. ‘Cause I needed a pick-me-up. God’s Pocket features one of the final performances of Philip Seymour Hoffman, but it unfortunately does not quite live up to the cinematic standard Hoffman often curated. It is difficult to ascertain where the blame lies, though it would be even more difficult to lay it at Hoffman’s feet.

Hoffman stars as Mickey Scarpato, a doer of odd jobs – not all of which are legal – living in the Philadelphia neighborhood of God’s Pocket in the 70’s. Mickey’s step-son, Leon (Caleb Landry Jones) dies unexpectedly one day, and the film follows the aftermath. Mickey must track down enough cash to pay local mortuary owner Jack (Eddie Marsan) for the funeral, while Leon’s mother, Jeanie (Christina Hendricks) questions what really happened to her son, with the help of Richard Shellburn (Richard Jenkins), a highly regarded newspaper columnist.

There’s a lot of plot there, but most of it gets tossed aside. The movie is paced slowly, allowing for a lot of meandering. It often feels like the picture is taking its time in building to something, but that something never really shows up.

God’s Pocket is the feature directorial debut of Mad Men‘s John Slattery, who also co-wrote the script with Alex Metcalf, based on Peter Dexter’s novel of the same name. The buzz coming out of this year’s Sundance Film Festival was not good, but this is the kind of project destined to receive a backlash to the critical reception, regardless of the original consensus. If there’s one things film critics like more than film, it is being contrary. But I had not managed to find God’s Pocket‘s vocal supporters. Until today. While listening to the latest episode of Movie B.S. with Bayer and Snider one of the guys (I think it was Snider) gave a glowing review of the film. And then, lo and behold, my local Sundance theater started doing $5 Tuesdays. It’s like I was destined to see this movie.

Perhaps destiny has a wicked sense of humor (just kidding, there’s no such thing as destiny. Or the afterlife), because this movie is just not very good. It’s wildly disjointed. There are a bunch of characters with clear connections, but none of them really gel together. The talented members of the cast are doing their best with the material, but there is either a breakdown in the script or the direction that prevents the movie from cohering into a competent whole.

Perhaps Slattery is too ambitious here. The scope of the story is wide, but he is actually pretty good about spreading out the screentime among the various characters. I don’t know, maybe he spreads the 90 minute run time too thin. Maybe focusing on one or two characters would have been more effective.

The impulse is understandable, as the cast Slattery assembled is quite excellent. And despite some shortcomings – Hendricks gets rather shrill toward the film’s conclusion, and Marsan’s American accent is terrible – they commit to their characters. Hoffman especially never shows any signs of not being Mickey Scarpato. That level of investment was something Hoffman brought to every role, regardless of the film’s overall quality. God’s Pocket is the first Hoffman movie I’ve watched since his death. His performance reminded me that I need to correct that.

The common thinking on actors-turned-directors is that their greatest strength lies in drawing characters out of their performers. A movie like Jason Bateman’s Bad Words shows that this technique can work, but films like God’s Pocket are proof that it takes a lot more than that to create a satisfying film, no matter what how strong you cast’s pedigree may be.