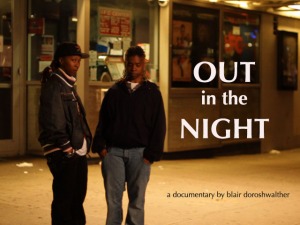 And so it begins. For real this time. The 20th Los Angeles Film Festival – my first film festival. So after a long day of work, I drag my weary bones up to LA Live for an evening of film.

But first I have to wait. My first scheduled film wasn’t set start until 9:15 pm, so it’s safe to say I had time to kill. Luckily, being a Film Independent member has it’s benefits at the festival, one of which is access to free tickets for screenings that aren’t too full. So my first stop upon arriving (after a slightly confusing parking process) was to grab a ticket for a film called Out in the Night (more on that later) at 6:45 pm. So now my evening is looking a little busier.

But before we get to the films, it’s time to explore a little. Downtown LA is slowly turning into a gentrified Mecca for hipsters and richsters alike. I don’t really fit into either of those designations, so I don’t get to DTLA (as the cool kids call it) too often. Why not use this opportunity to explore a pretty large part of my city.

And by “explore” I mean I walked a few blocks up to a major shopping center, complete with a Target and a California Pizza Kitchen. I told myself I was looking for food – scoping out some grub to sustain myself over the next week – but really I was driven to familiarity out of fear. Fear of the unknown. Fear of erratic drivers. Fear of being late to my movies.

Fear is a presence in Out in the Night, as well. An entrant in the documentary competition here at the LA Film Fest, Out in the Night presents the story of four young black homosexual women who were unjustly sent to prison in the aftermath of a violent altercation on the streets of New York. Affectionately directed by blair dorosh-walther (intentionally lower-case), the film examines how prejudices about the race and sexuality of the alleged perpetrators led to a crime much worse than any that they committed.

dorosh-walther’s camera is able to capture some very effective moments in the lives of these young women, but the narrative structure of the documentary is a little unwieldy. dorosh-walther moves events along both chronologically and non-linearly, depending on what will have the most dramatic effect. So sometimes information is withheld to get a greater reaction, while other times the story moves along so ploddingly that interesting pieces are sacrificed in favor of viewing events we don’t really care about.

But dorosh-walther is trying to tell the whole story, and, despite its faults, Out in the Night (which I’m just realizing now is a pun title) is an competently shot piece that sheds light on how our fears and misconceptions affect others.

It turns out that my own fear of missing a movie was unnecessary. I don’t know if this is common at all festivals, but Out in the Night ended up starting late. Only 10 minutes, mind you, but late regardless. That was nothing compared to the delay before my second film of the evening, The Well. As I sat in the queue for what ended up being an hour and 20 minutes, I reflected on the fact that, as unprepared as I was for this event, the fest had way more moving parts to worry about.

When we finally filtered into a theater that I assume was filled with friends and family of co-writer/director Thomas S. Hammock, I worried that my bad attitude regarding the extended wait would sour my perception of the film. As it turned out, I needn’t have worried, because even if the film had started on time, it would have been just as bad. Except then I could have left before midnight.

The film takes place on Oregon, “a few years from now.” A draught – it is never clear how extensive – has turned once-fertile farmland into arid desert. The remaining Oregonians have been driven to do terrible things to one another to stay hydrated. Our hero, Kendal (Haley Lu Richardson), strives to find the parts she needs to fix a plane and fly away from this god-forsaken land with her sick friend, Dean (Booboo Stewart, way less jacked here than he was in X-Men: Days of Future Past), but it won’t be easy.

It is hard to tell whether the movie’s main problem is the dialogue in the script, or the completely flat delivery of that dialogue by Richardson and Stewart. You know what? There’s enough blame to go around. The script by Hammock and Jacob Forman (All the Boys Love Mandy Lane) is full of cliched lines and just some good old fashioned nonsense, and Hammock’s young stars don’t infuse it with much life.

That isn’t an impossible task, as all-star character actor Jon Gries (Napoleon Dynamite, Taken) proves in his scenes as the movie’s villainous water-miser. Gries’s Carson doesn’t have much motivation on the page, but the actor lends an air of commitment and professionalism that is lacking from pretty much every other performance in the film.

So, as far as positives go, you’ve got a performance from Gries, a couple of impressive moments of well-directed tension (kudos, Hammock), and schizophrenic score by Craig Deleon that hits more than it misses. Everything else is pretty dire. As dire as the subject matter, which includes fear of death and fear of what we are capable of when pushed to extremes. Fear. Huh. Look at that. I found a theme for the day.

My own fear was reignited as I drove home on the 101, stuck behind three idiots on motorized bicycles doing tricks at 70 miles per hour. I really didn’t want to have to explain that situation to a police officer after accidentally running one of them over. See: fear. Those dicks couldn’t ruin my night too much. Sure I saw a stinker of a narrative feature, but I also saw a pretty good documentary. And they were both world premieres, so relish this review while you can. Soon enough some jerk “professional” will be telling you what to think about them, instead of this jerk amateur. That will do it for Day Two. Until tomorrow.

Don’t forget to read Steven’s “coverage” of Day One of the Fest. Come back tomorrow for more from LA Live and the LA Film Fest.