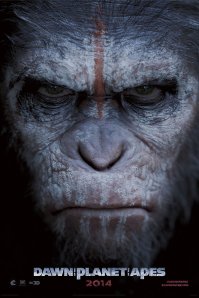 The success of 2011’s Rise of the Planet of the Apes was something of a surprise. It was a prequel to an antiquated franchise that had spectacularly failed to be rebooted ten years earlier. Against all odds, the movie went on earn critical praise. And a lot of money. Rise has a solid emotional arc built on a great physical performance from Andy Serkis as Caesar, the first of the thinking apes that are destined to rule. In the wake of such a well-received film, a sequel was a forgone conclusion. Now, three years later, the Dawn of the Planet of the Apes has arrived.

Rise ended rather innocuously with Caesar’s band of apes forming a sanctuary in Muir Woods outside of San Francisco, however over the credits we learned that a deadly man-made virus went on to spread throughout the human population, presumably killing most. That’s where Dawn opens, with a news-footage montage quickly getting the messy exposition out of the way. There was a virus, most of the humans died, now: apes. It is not the cleanest intro, but it gets the job done.

James Franco’s scientist character was a huge component in Rise, to the film’s detriment at times. The sequel learns from it’s predecessor’s mistake, opening with Caesar (Serkis), his advisor Koba (Toby Kebbell), and his son Blue Eyes (Nick Thurston), before slowly introducing humans into the story. The San Francisco survivors, led by Malcolm (Jason Clarke) and Dreyfus (Gary Oldman) hope to restart a hydro-electric dam located in the apes’ territory. Without the power it will provide, they fear their makeshift society with devolve back into violence and death.

So a tenuous truce is formed between Malcolm’s humans and Caesar’s evolves apes. But paranoia and mistrust on both sides threaten what little peace exists. The parallels between the humans and the apes are not subtle, and they are quite abundant in the script by Mark Bomback, Rick Jaffa, and Amanda Silver, but they are effective. Caesar’s growing family is mirrored by the one Malcolm has formed with his son (Kodi Smit-McPhee) and fellow survivor Ellie (Keri Russell). Our sympathies clearly lie with the apes however, as the human characters are far too underwritten to engender too much interest. At one point Malcolm is described as a “good man,” and that is really as far as his character development goes. Clarke hints at hidden depths, perhaps the result of actions taken in the chaos after the flu hit, but none of that promise is ever realized. Dreyfus is similarly one-note, though Oldman does good work to make him less so.

It’s a script problem, but I hesitate to really call it a “problem.” Dawn of the Planet of the Apes is an example of what David Ehrlich at The Dissolve calls the post-human blockbuster – movies in which the human characters are neither incredibly interesting nor even the focus. Ehrlich was specifically talking about Gareth Edwards’s recent Godzilla remake when he wrote the article, but Dawn is a much better example, as it has the good sense to fore-front it’s non-human characters from the very beginning. While Godzilla spends far too much time with the lifeless Aaron Taylor-Johnson’s Ford Brody, the writers of Dawn of the Planet of the Apes know that the movie’s strength is the ape community, and they adjust their film accordingly. The ape side of their story is rich, layered, and intensely Shakesperean.

This is accomplished so deftly thanks to the physical performances of the actors. The ape characters are fully computer-generated, but the motion-capture work is astonishing. Serkis’s work in Rise was award-worthy, and while he is limited to a wise leader role for much of the sequel, Kebbell is there to pick up the slack. Koba as performed by Kebbell is thoughtful, ruthless, wickedly intelligent, and even funny – which is good to see in a movie that may take itself a little too seriously. He is an Iago-type figure, to continue the metaphor, though Caesar is clearly Julius Caesar so I’m getting all mixed up.

The physicality is well-matched by the CGI, which looks quite good throughout the feature. The effects in Rise don’t hold up especially well – most likely because computer imaging techniques are improving so rapidly – but some sequences in Dawn look unbelievably lifelike, particularly any scene involving Maurice the orangutan (performed by Karin Konoval). Maurice’s fur and face are impeccably rendered – the animators really outdid themselves. Sure, some of the action sequences look video-gamey in comparison, but I’ll take that tradeoff in exchange for emotive scenes like the one between Koba and Blue Eyes at the campfire.

Matt Reeves (Cloverfield) takes over as director for Dawn of the Planet of the Apes, and a great product has been produced under his watch. Not only are all of his departments humming, he composes some cool shots – a fixed perspective from the top of a tank being a real standout. The fight scenes are well-choreographed and well-shot. I was never unsure about who was doing what, which is even more impressive when you consider that most of the apes are the same color. The fact that these people made me question whether I was rooting for the humans or the apes is a testament enough to the quality as far as I’m concerned.

Dawn of the Planet of the Apes is 130 minutes long, but the pacing and performances kept me from ever feeling bored. Reeves and company managed to make a science fiction movie about apes, fathers and sons, war and peace, and survival. And they made it good. I highly recommend Dawn of the Planet of the Apes. Even for kids. They’ll just have fun looking at all the monkeys.