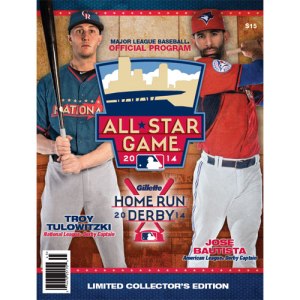 you can buy the program for 15 dollars or look at a picture of it for free. either way you’re getting the same amount of information

We follow up one allegedly boring sport with another one. It’s All-Star weekend for Major League Baseball, which is really confusing because the game is on a Tuesday. But tonight is the event that people actually care about: the home run derby. Home runs are the part of baseball that even the most apathetic of viewers get excited about. So you can’t go wrong with an event expressly devoted to the long ball.

Unless it doesn’t happen. It was touch and go for a while, as the good people at Target Field in Minneapolis were not prepared for water to fall from the sky. I was looking forward to another quick sporting event that I could quickly write a several hundred words about and go to sleep. Here we are at 9:00, and the event just ended.

Anyway as I watched the pre-derby coverage from 5 to 6 pm, I was struck by how little anyone cared about the fact that Adam Jones was competing. Maybe I’m a little biased, but I’m pretty sure the Baltimore Orioles’ center fielder is everyone’s favorite player. No? Instead everyone is more interested in Justin Morneau’s return to Target Field after being traded last season or giant-baseball-monster Giancarlo Stanton’s derby debut or Yoenis Céspedes’s quest for two derbies in a row. It’s almost as if no one is fascinated in the fact that Adam Jones has 16 homeruns and seems to be a really nice guy! Baseball has changed.

The rain seemed to be a bad omen as the derby finally began. Todd Frazier of the Cincinatti Reds hit only two homeruns to lead things off. It was pretty clear that this would be the end of the line for the 28-year-old. He was followed by a similarly pitiful performance from the Twins’ own Brian Dozier. Troy Tulowitzki of the Rockies kicked things up a notch with 4. Then the derby finally got interesting as Blue Jay Jose Bautista hit 10 homeruns, and ended his turn early. That’s hubris. Yasiel Puig followed this with the greatest practical joke he’s ever played by putting up zero homeruns. Now, finally the event everyone has been waiting for. Jones sidles up to the plate and knocks out 4 homeruns before deciding to be nice and give the other players a chance. Staton hit a couple after that – I don’t really remember. As did Josh Donaldson, Morneau, and Céspedes.

Bautista, Jones, and Céspedes ended up moving on for the American League, with Bautista getting a bye in the second round. Their counterparts in the National League? Stanton, Tulowitzki, and… Frazier? Somehow, due to pretty lackluster performances all around (did I mention Puig hit no homeruns?) Frazier just manages to squeeze into the second round after a swing-off with Morneau. Surely this will be the end of the line for him.

Maybe not. Frazier comes out strong in round 2, hitting six homers. This ended up being enough to best Tulowitzki, who could only manage two this time. On the American League side, last year’s big winner Céspedes finally warms up and knocks nine balls into the stands. My personal friend Adam Jones sees this and decides to go easy on his peer, recognizing that this man clearly needs home run derby wins to feel useful. So after hitting what Chris Berman calls “an upper-deck job,” Jones gracefully bows out.

And now, round 3. Frazier has been lucky to get this far, but now he’s going head-to-head with Stanton, God’s second gift to baseball. After Puig, of course (zero! at a homerun derby!). Frazier seems to accept this eventuality, only managing one homerun in his seven outs. So that one’s wrapped up. Might as well move on- wait, what? Stanton hits zero homeruns in round 3? He pulled Puig? What the hell? As I’m sat there, shaking my head, Céspedes edges out another competitor, beating Bautista 7 homeruns to 4. Maybe giving Stanton and Bautista those byes was a bad idea.

So we find ourselves at a final in which one competitor only hit 2 dongs in the first round. Frazier going from zero to hero in this contest is the kind of laughable outcome that could convince an atheist that some sort of all-knowing deity really does exist (and apparently roots for the Reds). Alas, it wasn’t in the cards. Instead the narrative of a kind-of underwhelming position player seeking his second derby in a row won out.

The 2014 homerun derby wasn’t great. The changes to the rules allowed for more players, but fewer homeruns, and which one do the people watching the exhibition really care about? Plus there’s the always-terrible commentary of Chris Berman to contend with. That man has a way with words. I know that phrase is usually meant as a compliment, but that isn’t the case here. It’s really the opposite of a compliment. I dislike him greatly, is what I’m trying to say. I don’t expect to watch the All Star Game tomorrow. This was the pinnacle of the break for me, so I’m pretty disappointed. Never again! Unless another Oriole gets in next year.