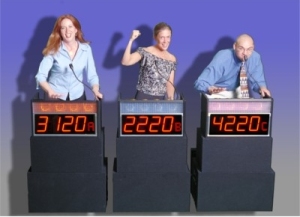 We go from one interview to what is basically another one. A friend/co-worker has some sort of shady connection at a game show production company. He kindly asked me to be part of a team with the express purpose of competing in a trivia show with the potential of earning one million dollars. I’m extremely flattered he considered me, but he maybe should have thought twice.

After a brief phone conversation with one of the show’s casting directors, it was quickly decided that our three-man team ought to come in for a tryout. So after a full day (well, a mostly full day) of work, I made the drive from South Central to Sherman Oaks (with a short pause for a power nap (ugh)) to audition in the sparest office I have ever seen. I am not entirely convinced this whole thing isn’t a front for some sort of illegal activity.

The three of us met with the casting director in person. If the goal of the game show were to be charming, we would be millionaires already. There is a level of magnetic chemistry that exists between myself and my teammates that the guys in the room were really tickled by. It’s the same way at work, people are either incredibly entranced by our exchanges, or extremely infuriated by them. There are no moderate reactions.

Unfortunately the goal of the show (which I won’t mention by name because I signed a non-disclosure agreement that I didn’t actually read) is not just to be interesting. You actually have to answer trivia questions. I always thought I would be good at trivia, but it turns out that there is a difference between being a good trivia player and having a brain full of trivial facts. Between our practice questions and the test that they made us take, my self-esteem re: trivia dropped pretty low. I think the game’s multiple choice nature really threw me off. When I’m playing along to Jeopardy (because I’m super cool) I do pretty well because I have to find the information in my brain. Multiple choice forces me to reconcile different answers, any of which could plausibly be true. Classic overthinking.

So we may be in the sweet spot for the show – three engaging competitors who probably don’t have a great shot at winning that alleged million bucks. The only thing standing between us and fortune and fame is the longest application you’ve ever seen in your life. I get vertigo just scrolling through it. So many questions: name, schooling, work experience, mother’s maiden name, back account info, social security number. Seems like overkill, but I guess it’s worth it.

I don’t know if I really want to appear on the show, but I will because I’m a good friend (and because I have nothing better to do). At this point I’m just hoping to come out of the whole experience with a little cash and an autograph from Chuck Norris. I’m pretty sure he’s gonna host this thing. I have a really good feeling about it.