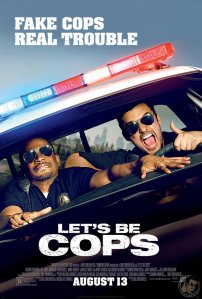 Cards on the table, guys: I actually saw Let’s Be Cops last night, but the whole Robin Williams situation kind of changed my plans. So, if you’ll allow it, I’m going to run my review of Let’s Be Cops tonight. And if you won’t allow it, well I couldn’t care less. This is my blog. I’ll do whatever the hell I want.

Join me, won’t you, as we journey back to April 2004. Do you remember where you were? I do. I was finishing my freshman year of high school, and hot off of a critically acclaimed turn as Caleb in my school’s production of Seven Brides for Seven Brothers. If you can believe it, I was a bit of a dork, so I often used movies and television as an escape from my dull life. Enter: The Girl Next Door. This movie had everything: Elisha Cuthbert (who I had a huge crush on in those 24 days), nerdy protagonists (including early Paul Dano, before he got really creepy), exposed breasts, “Baba O’Riley,” and (best of all) Timothy Olyphant. It was the perfect movie for me at the time, and it still holds a special place in my heart.

The Girl Next Door was directed by Luke Greenfield, a man whose career never really took off the way you might have predicted after that movie came out. Now Greenfield is back with a new comedy starring Jake Johnson and Damon Wayans, Jr. (both of New Girl fame) as a couple of LA losers who find a certain amount of purpose from pretending to be police officers. As Ryan (Johnson) starts to get more and more wrapped up in the fantasy, both men are endangered by their increasing involvement with an organized crime ring run by a vaguely foreign psychopath (James D’Arcy).

Let’s Be Cops – like any buddy comedy – will live or die based on the chemistry between its two leads, and luckily Johnson and Wayans have that in spades. Let’s Be Cops was shot before Wayans returned to New Girl, but there is clearly an intense amount of camaraderie between the two men. They play off of each other very well, and when Ryan calls Justin (Wayans) his “brother,” you believe that that connection exists.

All of which serves to make Let’s Be Cops a very funny movie. Greenfield co-wrote the screenplay with his friend Nicholas Thomas, loosely basing Justin and Ryan on themselves, respectively. They craft a few strong set pieces that allow Johnson and Wayans to riff like crazy. And they assemble an equally talented supporting cast, including Rob Riggle, Keegan-Michael Key, Natasha Leggero, and others.

But one of the movie’s greatest strengths is it’s ability to code-switch from a raucous comedy to a gritty crime drama-ish situation. D’Arcy’s Mossi is a pretty scary villain, despite receiving very little development. D’Arcy just puts a lot of physical menace into his scenes that is felt by the audience, as well as the other characters on screen. And when things turn bad for Ryan and Justin – as they inevitably must – Greenfield effectively ramps up the suspense, especially in a particularly tense scene in which Johnson’s character cautiously creeps through his own apartment. That one certainly raised my hackles a bit.

Let’s Be Cops is a really broad comedy – the humor is designed to appeal to the greatest number of viewers possible, and while that sometimes leads to obvious jokes, the totally-game cast sells them. Similarly, there are some unbelievable contrivances in the script when it comes to the police work being done. But none of that is too distracting. Instead the takeaway is that Let’s Be Cops is a really funny comedy from a bunch of talented people. It has the possibility to be a sleeper hit a la Horrible Bosses or The Hangover, though I may not mind a sequel in this instance.