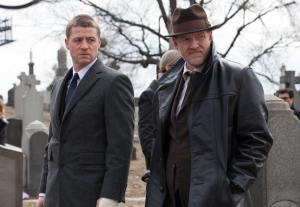 Despite not reviewing one in a few months, I love comics. That’s no secret. So ultimately I hope for the success of any comics-related media. I easily lose myself in that enthusiasm at times, especially where Marvel movies are concerned. It is difficult for me to take an objective view when it comes to properties I have loved for so long. DC Comics and Warner Bros. have made that a little easier, what with the release of terrible movies like Man of Steel and announcement upon announcement that slowly drains all excitement from my soul for their upcoming slate of comic book movies. But DC has always been more tenacious when it comes to the TV realm. Batman: The Animated Series is a legitimately great show, and I’ll admit I probably watched Smallville a few years longer than I ought to have. The 2014-2015 television season sees the debuts of several new series based on DC properties, the first of which is Gotham – a show following Jim Gordon (the man who would be commissioner) and Bruce Wayne (the boy who would be Batman) in the early days following Wayne’s parents’ double murder. Time to expect the worst and hope for the best.

“The (blank) who would be (blank)” is a common phrase that comes to mind throught the pilot episode of Gotham. From the very beginning we are treated to a familiar sight – a shadowy figure prowling the rooftops of Gotham City. But it isn’t Batman we are watching, it’s future-Catwoman Selina Kyle (Camren Bicondova). Selina wanders the street, stealing what she can, before witnessing another iconic image in Batman lore – young Bruce Wayne (David Mazouz) kneeling over the gunned-down bodies of his parents. Detectives James Gordon (Ben McKenzie) and Harvey Bullock (Donal Logue) are dispatched to the scene, and as Bruce is picked up by his new guardian, Alfred Pennyworth (Sean Pertwee), Gordon makes an impossible promise – he’s going to find the man who killed Bruce’s parents.

Logue is a very welcome surprise in Gotham. McKenzie seemed like a good choice as Gordon, but I had no idea Logue was in the mix. McKenzie has made a career of playing the quiet outsider (the token poor kid on The O.C. and a rookie LAPD officer on Southland) that should in theory translate well to a perpetual wet blanket like Jim Gordon. But this younger Gordon is impulsive and brash; McKenzie isn’t necessarily up to the task. Luckily Logue is around to pick up the slack as the world-weary veteran detective. He doesn’t like his job or his co-workers, but he’s willing to do what it takes to get the job done.

Except for this job. Bullock desperately wants off of the Wayne murder, but Gordon doesn’t let him get away that easy. After a dead-end check-in with forensics technician Edward Nygma (Cory Michael Smith) – the man who- forget it, he’s the Riddler – Bullock takes his new partner to meet Fish Mooney (Jada Pinkett Smith), one of many crime bosses in the city.

At this point Gotham‘s tone starts to make itself apparent. It is playing on the city’s inherent noir background, as any good Batman-based film or tv show should, while mixing with contemporary music and camera work. It is a specific choice that can be hard on the actors, especially as more of the 60’s-era Batman camp starts to creep in with the arrival of Pinkett Smith’s Fish and her superficially obsequious lackey Oswald “Penguin” Cobblepot (Robin Lord Taylor).

Fish leads the detectives to the door of Mario Pepper (Daniel Stewart Sherman), one of thousands of faceless thugs in the city. Evidence found in Pepper’s apartment indicates he is the culprit behind the deaths of the Waynes, and all of a sudden Gordon and Bullock are heroes. But Cobblepot, seeking advancement in his not-so-legitimate profession, lets on to Detectives Renee Montoya (Victoria Cartagena) and Crispus Allen (Andrew Stewart-Jones) that the story in the papers may not be entirely truthful. Upon learning this himself, Gordon finds himself on a mission to uncover the true nature of corruption in the city. He may not like what he finds.

Though, I may not like it if he actually finds out who killed Bruce’s parents. That meaningless crime is the driving force behind Bruce’s transformation into Batman. If Thomas and Martha Wayne’s killer is brought to justice, what’s the point? I am not so precious with my comics that I won’t allow for a little departure, however. After all there is already a whole lot going on in this pilot. Honestly that is my favorite thing about it. It feels almost Wire-esque in the number of characters and subplots present (Wire alum John Doman even appears as Fish’s boss Carmine Falcone). Every character has secrets, down to Gordon’s fiancée, Barbara (Erin Richards), though that one may not be much of a mystery to anyone familiar with the Montoya character from the comics.

The series is created and executive produced by Mentalist creator Bruno Heller, who has certainly proven he can write a successful procedural with serialized elements. My main concern at this point is just how many characters from the Batman mythos are hanging around the show. The pilot alone introduced younger versions of Catwoman, Riddler, Penguin, Poison Ivy, and a dark comedian viewers may want to keep an eye on. Hoping for a grounded police series set in the Batman universe may be a pipe dream, but it seems even less likely with all of these supervillains to-be hanging around.

But perhaps grounded isn’t what Heller and company are going for. We’ll find out in future weeks, as they settle into a rhythm. For now the show is a slave to two masters: the noir of recent Batman projects and the camp of older versions. It’s a tough tightrope to walk, and some actors (Logue, Pinkett Smith, Doman, Pertwee) are more adept at it than others (McKenzie). But this is a pilot, and there’s plenty of room for improvement. The important thing is that the network took a shot at something unique (to an extent), and I look forward to seeing where they take it.