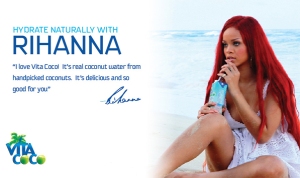 It’s been a rough couple months for me guys. I wrote about being sick back in May in the midst of The 25th Annual Putnam County Spelling Bee. I usually have a very strong constitution, but something is happening to me this year. Illness is in vogue in 2014, and you can call me Kate Upton, because I’m modeling it like crazy. It’s all virus, all the time, so in a situation like that your renewed health depends more on how you treat your body than on what medications you take. And that’s why I’m here on behalf of coconut water.

As you may remember, when I got back from San Diego Comic Con I was not feeling well. I had a sore throat that almost sabotaged an audition, but after a few days I felt pretty okay. Then that sore throat started coming back. And then went away. And then came back again. It was a weekly cycle that was at its awful peak on Mondays, but usually cleared up by the weekend – only to come back again, stronger than ever Sunday night.

Any reasonable person might look at that scenario and assume the entire thing is a psychosomatic response to my unconscious hatred of my job. But I don’t hate my job. Not entirely. Maybe a little.

I was inclined to agree with that notion, until it got to the point last week where I actually had swollen lymph nodes. It’s hard to fake that. My body was fighting a legitimate threat of some kind. I took a couple of days off, went to the doctor. There wasn’t much to be done as it’s tough to combat a virus, but I did get the old standby: “stay hydrated.”

It’s been tough to stay hydrated the last few weeks. First of all, it was hot as hell. Not literally, as Hell is probably really hot – that’s why it’s Hell. But I have to imagine the heat in LA last week was at least pretty close to that in the underworld. Also, with a stuffed up nose, you gotta breathe through your mouth, and that’s gonna dehydrate you even more. So I went on a quest for hydrating liquids, something that would replenish the electrolytes that my poor-people water doesn’t contain.

There’s always Gatorade. Hah! Yeah, if you want all that sugar. Get it out of here. Or there’s Pedialyte, but I’m not a baby with diarrhea. Then there’s something I’ve never tried before. Coconut water. What a novel concept.

Here’s a classic “tomato situation.” I hate solid tomatoes, but I love tomato sauce. Always have, always will. Likewise with coconut – I can’t stand the stuff. The texture is gross and I don’t even understand the appeal of the taste itself. No thank you. That’s why Mom always got the Almond Joys on Halloween. But coconut water? Now this I can get behind.

The first taste is odd. It’s a little more viscous than earth water, but it isn’t totally gross. My first buy is the pineapple-flavored Vita Coco. A little too sweet for me, but the unflavored version is just a little too bland. Eventually my taste buds adjust to both, because the human palate is malleable in that way. Maybe. I don’t know what I’m saying. I’m talking out of my ass.

Coconut water is gonna be part of my life for a while. It’s not the ideal drink whenever you need to refresh, but it’s good after a workout, when your body needs to replenish those ions (he said as if he has ever worked out). Nothing beats good old normal water, but the coconut stuff is at least making a go of it.