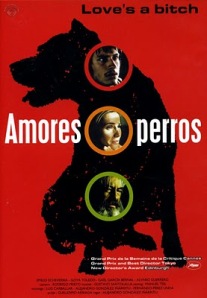 You might be sitting there wondering to yourself “why is Steven reviewing some random movie from 14 years ago?” The answer comes in the form of the film’s director. Amores Perros was the debut feature by Mexican director Alejandro González Iñárritu. Iñárritu’s latest picture, Birdman, starring Michael Keaton as a forgotten star known mostly for his iconic role as the titular superhero, is the movie I am most looking forward to before the end of the year. What better way to prepare than to revisit Iñárritu’s (divisive) filmography, and possibly temper my expectations for what’s coming by seeing what has come before.

Amores Perros is practically an anthology film, featuring three separate stories connected tangentially through a car crash and other coincidences. The first segment, “Octavio y Susana,” stars Gael García Bernal (in one of his earliest roles, before he added the “Bernal”) as Octavio – the younger brother in a lower-middle class family. Octavio harbors feelings for his brother’s wife, Susana (Vanessa Bauche), but cannot convince her to run away with him. He gets the family dog, Cofi, involved in underground dogfighting as a way to make money. It appears as though Octavio will finally have the means to care for Susana, but his problems quickly escalate, and Octavio finds himself in a dangerous position.

“Octavio y Susana” is the weakest story in the film, as far as I’m concerned. Here Iñárritu quickly establishes that this is the type of film where no one is really a “good guy,” and that includes Octavio. He behaves like a petulant child throughout what is the longest chunk of the movie. There is nothing wrong with an unlikable main character, but at times García Bernal plays the character almost too compassionately. The performance clashes with the character as written in a way that is off-putting. I get that we shouldn’t necessarily root for any of these people, but the idea that everyone does bad things kind of falls apart when I consider the fact that I know a lot of people (most, in fact) who don’t participate in dog-fighting or murder or any of that. Or maybe they do, and they just don’t tell me about it.

Throughout this piece we see a bunch of random characters also hanging around Mexico City, though anyone who has seen any other hyperlinked indie movie from the last 20 years will quickly realize these people aren’t as random as we are led to believe. The connections start to make themselves clear in the second segment, “Daniel y Valeria,” wherein we meet an upper class couple deeply affected by the central car accident. Valeria (Goya Toledo), a famous model, is badly injured in the crash, and her boyfriend, Daniel (Álvaro Guerrero) – who is newly separated from his wife – finds himself playing the role of caretaker in the still-fresh relationship. Their tenuous bond is tested by Valeria’s condition, especially once her dog, Richie, jumps into a hole in the floorboards of their apartment and won’t come back up.

“Daniel y Valeria” is the shortest segment, and seems to have the lowest stakes, but Valeria’s slow unraveling and a tonal shift closer to the realm of psychological horror make it a more effective piece of storytelling than the disjointed “Octavio y Susana.”

Unfortunately Iñárritu starts to lose his structure with the final piece: “El Chivo y Maru.” Emilio Echevarría stars as El Chivo, a dog-saturated vagabond and former-revolutionary-and-prisoner-turned-hitman trying to find a way to connect with his daughter Maru (Echevarría’s real-life daughter, Lourdes), who believes him to be dead after he abandoned her as a very young child. The aftermath of the crash and a particularly upsetting assignment get El Chivo thinking about the choices he has made, and whether it isn’t too late to change.

“El Chivo y Maru” is actually the best part of Amores Perros, but it is marred by a re-insertion of Octavio and his people into the narrative. The pay-off to that story does not feel like it belongs in the humorous, introspective final third, and often it seems as though Iñárritu just placed them randomly throughout at the last minute. I can think of no real reason why those scenes wouldn’t be more at home in the “Octavio y Susana” segment.

I suppose the idea is that the connections between the stories will become more obvious, but the themes are readily apparent without the intercutting. The film’s title loosely translates to “Love is a Bitch,” and each piece of the feature contains both of those things: love and dogs. But the love on display is not necessarily positive. Octavio and Susana slowly build a connection, but it is so new that it ultimately doesn’t mean anything. Valeria and Daniel may be in a better place emotionally, but their love is tested so drastically that it almost stands no chance. And El Chivo has been utterly destroyed by the his detachment from what he loved and lost. Ultimately he is the only character who learns to accept what he cannot control, and thus stands a chance of salvaging a little happiness.

Amores Perros is a really strong first film. Even “Octavio y Susana,” which I don’t love from a story perspective, has an undeniably satisfying style. Despite the pieces being on unequal footing, they come together to form a well-made product.