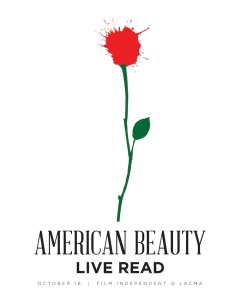 Ladies and gentlemen, it’s back; Jason Reitman’s Live Read series returned to LACMA tonight with a reading of the American Beauty screenplay by Alan Ball (Six Feet Under, True Blood). Before the reading began, Reitman described this series as being “so much more fun than directing movies.” That must be especially true for the still-young filmmaker lately, as his last two movies have not been well-received; Labor Day was lifeless and uninspired, and his latest – Men, Women & Children – has gotten so many bad reviews that I haven’t even seen it yet. Me! I see everything.

Reitman seems to have enjoyed the experience of making the movie, however, as he filled the American Beauty cast list with actors from his most recent feature. Tonight’s performers included:

Here’s where I admit that I’ve never seen American Beauty. I’m not as ashamed about this cinematic hole as I am about others, mainly because American Beauty has lessened in reputation in the years since its release. This is a common problem for Best Picture winners, as if winning that prestigious award automatically puts an “overrated” target on the movie’s back.

But it is easy to see why critical praise was so high. Ball’s script is unique and cohesive, providing the audience with moments of hilarity, catharsis, and drama. The standout character is obviously Lester, as both protagonist and narrator, but the roles of Angela and Ricky also provide opportunities for the actors to show off a bit.

Which is why it is somewhat surprising that the best performances in the reading came from DeWitt, LaMarr, and Dever is relatively slight roles. Carolyn as written is rather one-note, but DeWitt embodied the character with such personality and passion that the audience had no choice but to hang on every line. LaMarr’s commitment was equal to, if not greater than, DeWitt’s. Buddy is a pretty small role in the script, so LaMarr had the difficult job of portraying almost every other minor male character in the screenplay. He is a veteran of voice over work, however, and he brought every ounce of that versatility to the dozen or so characters he read.

The younger actors didn’t show quite as much range. Reitman did an excellent job casting Tope and Crocicchia, as they pretty much exude the creepy intensity and raw sexuality necessary for their respective roles, but neither actor managed to “turn it off” when called upon to read another character. Even Dever, who has been excellent lately in smaller independent movies, plays Jane with the same angst she brings to most roles. It works for Jane, but I would like to see her stretch.

No stretching required for Norris or Sandler, who both stay with mostly the same character throughout. It’s strange, because the Colonel is not a very large role, so Norris doesn’t get a whole lot to do here, but he brings the appropriate gruffness to the role. Sandler, on the other hand, took some time to figure this whole thing out. He sounded like reading this script was a chore for the first few scenes, but as the script went on he clearly became more comfortable with the idea. Sandler never ended up bringing too much energy to the table, however, perhaps afraid people might riot should be inject any overt charisma into his version of Lester.

The bad is evident in the script, along with the good. It is pretty over-written, with Ball using many more words than necessary to convey his intentions. And the final act is an absurd series of events with an even absurd-er resolution. But it doesn’t necessarily contradict what has already been a heightened and exaggerated tone through the earlier part of the screenplay.

Is this the best way to experience a movie for the first time? Probably not. But I can say that I am now interested in watching American Beauty, which is not a thought I have ever really had before. That’s a clear win for Reitman and his Live Read series. This thing is back with a vengeance, and I can’t wait to see what else the Reitman has planned.