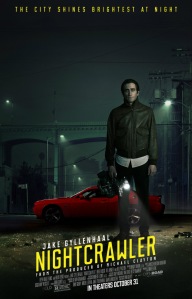 If you say the word “nightcrawler” to anyone invested in geek or nerd culture, the first image that will come to their mind is the smiling, furry blue face of the teleporting X-Man also known as Kurt Wagner. The more oligochaetological types mighty flash on earthworms, and some might even think of the Judas Priest song, but the protagonist in Dan Gilroy’s directorial debut Nightcrawler may just be more interesting than all of them. Yes, even more than the swashbuckling, elf-like mutant. I know! It’s hard to believe.

At the beginning of the film the viewer is introduced to Lou Bloom (Jake Gyllenhaal), an unemployed but tenacious skeleton of a man, stealing and selling what he can to survive in relative squalor. One night, as Lou drives down the freeway, he comes across a gruesome crash and watches as a camerman – Joe Loder (Bill Paxton) films the gory aftermath. Joe explains that he sells the footage to the news, and all of a sudden Lou has found his new career. In no time Lou procures a camera, hires an intern named Rick (Riz Ahmed), and begins selling his own footage to Nina (Rene Russo), a struggling producer at a low-rated network. Lou’s laser focus may be a little too much for everyone to handle however, as all of that pent-up ambition yields a man who is willing to do whatever it takes to succeed. Whatever it takes.

Deception is the least of the lengths to which Lou will go, and that concept is all over Nightcrawler – even from the opening credits. Gilroy and his cinematographer Robert Elswit (There Will Be Blood) treat us to a beautiful montage of picturesque views of Los Angeles, from the beach to downtown. These moments are shot with enough admiration to off-set the mostly negative view with which most film’s approach the city. But even Nightcrawler uses this moving picture-book as a facade, immediately cutting to a more unsavory locale when the story proper kicks in. Such juxtaposition is not an innovative technique in film, but Gilroy uses it well to set up a major theme of his film: the power of presentation. The very news organizations that buy the dicey footage from the victim-hounding “nightcrawlers” use it to create their own version of the Los Angeles crime narrative. But no one uses presentation quite in the way that Lou himself does.

There are a lot of buzz words that could describe Lou – tenacious, motivated, dedicated, self-starter, committed – but the best adjective for the character may just be “sociopathic.” At the start of the film Lou seems to be a hard-worker with few scruples, but as he becomes more successful in his chosen profession, the audience becomes more and more aware of just how conniving and manipulative this character is. What presents as Asperger’s, gives way to keen self-interest and delusional brilliance. The movie shares a lot of similarities with American Psycho in that way, in fact if I were being reductive I would probably describe it as “Patrick Bateman hunts for a job in the Great Recession.” Fortunately Gyllenhaal does way more than just copy Christian Bale’s performance in the earlier film. There is much more life in Lou than there is in Patrick, and you can see it in Gyllenhaal’s eyes and face. He gives an intensely physical performance that included losing 30 pounds for the role, turning his perpetually-young face into a jagged mask of bone and shadow – terrifying in the right (of wrong) light. Lou is the kind of man who seems to be capable of anything, and the fact that you don’t know where his moral line lies – if it even exists – is very off-putting.

The rest of the cast isn’t operating at the quite the same level. Paxton’s role is quite small, and his investment in it is of a similar size. Russo and Ahmed find more dimension in their characters, but this is often sacrificed to show how a ratings-driven system has corrupted even them. There is a really overdone message about how “society is the problem,” and it all feels a little over-the-top, but the movie seems to be aware of that fact.

The whole thing has a pulpy/Brian De Palma-y tone to it that sells the larger-than-life aspects. Lou is like Tony Montana, but instead of cocaine, he peddles tragedy. Tony’s empire can crashing down around him; the question becomes whether or not the same will happen to Lou.