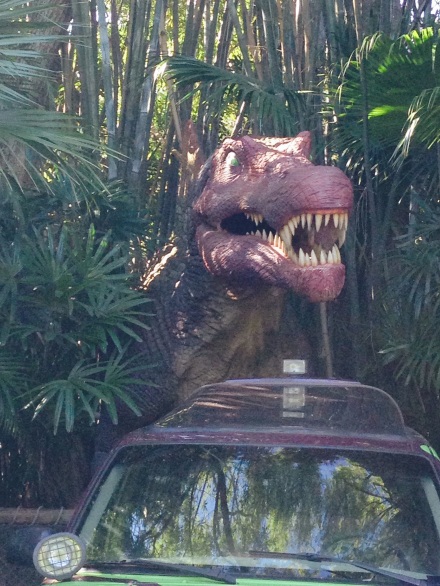 We have arrived at the meat of the latest trip to Orlando, Florida. Sure it is nice to reunite with my parents and my sister and my sister’s Rudi. But we all know why we’re here. It’s the main reason my mom wanted us to come. The happiest place on Earth: Universal Studios.

There is a Universal Studios in Hollywood, of course, but there are about five rides on the campus there, and only half of them are worth waiting for. The park arose as an off-shoot of the film studio, but it wasn’t until Universal Studios Florida opened that the company figured their shit out.

The Cohen clan last raided the parks in 2004, and though 10 years have passed, we were all a little curious as to what our present day adventure would hold. The matriarch was most excited, champing at the bit for a chance to get into The Wizarding World of Harry Potter, despite the fact that she has neither read the books nor seen the movies. She just loves theme parks.

So she was understandably excited to get the show on the road today, but my sister (the lady) was wary where waking up was concerned. After much debate (and guilt from both sides) was bandied about, a decision was reached. We would leave early, but not dramatically so. Still early enough to prompt arguments between the lady and her gentleman, however. Tempers flare up in the early morning, so I get a little bickering. The hope was that the park itself would cure all ills.

The Universal Orlando Resort actually consists of two parks: Universal Studios Florida (the traditional film-inspired park) and Islands of Adventure (a park composed of Disneyland-esque “worlds”). Islands of Adventure is a bit of a misnomer, considering the park consists of solid ground surrounding a body of water, rather than the other way around, but we’ll let that slide.

The family was able to overcome the poor naming convention and enter Islands of Adventure first. We began our day in Marvel Super Hero Island (Disney is just waiting for those rights to expire, I’m sure). Ten years ago The Incredible Hulk roller coaster was the best ride on the grounds. It still packs a punch, but to anticipation of that impact is lessened by Universal’s new policy of demanding customers lock most belongings away before riding. The lockers are complimentary for the duration of your ride, but finding one can be a hassle. Luckily The Amazing Adventures of Spider-Man required no such precaution. Back in 2004 that ride felt like it was state-of-the-art, and while the 3-D simulator no longer impresses as it once did, the ride is still fun – as well as being highly influential in the theme park world.

These standbys were out of the way, so it was time for the trek across the park to an unknown entity. As we blew through Toon Lagoon and Jurassic Park – stopping for a picture of everyone’s favorite dinosaur: Spinosaurus – the twinkling tones of John Williams’s original Harry Potter and the Sorcercer’s Stone score got louder and louder. We were there – Hogsmeade and Hogwarts itself. The park retrofitted a couple attractions for the Potter brand, including the snooze-worthy Dragon Challenge dual roller coaster. The main event, however, is Harry Potter and the Forbidden Journey, a dark ride that utilizes robotically controlled “benches” in conjunction with screens featuring scenes in and around Hogwarts. The footage on screen is pretty poor quality, but the experience is quite thrilling, as the uncumbered motion of the bench is unlike most theme park attractions of the day.

After a good meal and a beer (real beer, not that butterbeer bullcrap), the family loaded on the Hogwarts Express, a train that connects customers with the park-hopper pass from the Wizarding World of Harry Potter to the Potter-themed chunk of Universal Studios proper. This is where the lines started becoming a hassle. Up to this point we had not waited in a line longer than 30 minutes, but the Express was a different story. After occupying ourselves for an interminable period of time, we finally boarded the train and were treated to a cute depiction of the ride from Hogwarts to London, including appearances by familiar characters both inside and out of the train. This attraction is brand new, as is the other Potter ride in Universal Studios Florida: Harry Potter and the Escape from Gringotts. This attraction takes the rider through the wizard bank, though some evil influences are about as well. The ride is a mix of a traditional steel roller coaster and 3-D motion simulation, but it does not blend these two masters very well. The first drop is exhilarating, but everything after that is just kind of dull.

Although it is hard to tell if the ride is fully to blame. The line for Gringotts was just as long as it was for the Express, and that certainly didn’t improve anyone’s mood. Plus, this is when fatigue starts to set in. Hard. Everyone is getting tired and exasperated, but no one really wants to admit it. Yet. So we continue on. There are plenty of rides in Universal Studios Florida, but it was clear we only had patience for a couple more. Well… some of us didn’t have anymore patience. So the whole family didn’t tackle Revenge of the Mummy: The Ride (another dark steel coaster, and a nostalgic touchstone for the Cohen children) or Transformers: The Ride 3D (another 3-D motion simulator – alike in every way to the one in Hollywood), but that is probably for the best. That way, as we exited the park after a good workday’s-worth of playtime, no one was in a bad mood. This allows the rest of the night to be pleasant.

It was a pretty successful day as far as Cohen family trips go. Not only were the rides fun – a good mix of old favorites and new kicks – but the company was well-behaved. Amusement parks are often accompanied by complaining or anger (both of which I have been guilty of in the past), so the good reason and grace of everyone involved was impressive. Perhaps this is evidence of a family unit’s maturation. The vacation isn’t over yet though, so we probably shouldn’t jump to conclusions.