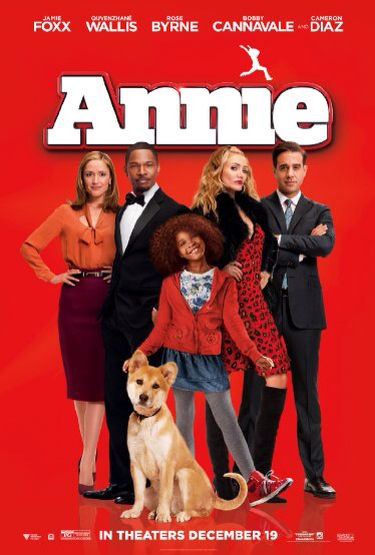 As my primary movie-going companion and I entered the theater to watch the new Annie update, I found myself asking a question that had no yet occurred to me: “why am I seeing this?” I have no connection to the original version, and despite my appreciation for musical theater, I’m hardly a completist. It’s a simple question, with a simple answer: compulsion. In my undertaking of this blog project, I have found myself watching plenty of bad movies for no reason other than to write about them. That’s one thing I cannot wait to leave behind in the new year. Hopefully this time next year I won’t be going to whatever is the Annie of 2015, but most likely I will.

Surely most people are familiar with the story, but I’ll give a quick summary anyway, as screenwriters Will Gluck (who also directs) and Aline Brosh McKenna have made a few changes to bring the story into the 21st century. Annie Bennett (Quvenzhané Wallis – the subject of The Onion‘s funniest tweet) is a foster child living with depressive alcoholic Colleen Hannigan (Cameron Diaz), while harboring dreams of being reunited with her long lost biological parents. One afternoon Annie is saved from being hit by a car by mayoral hopeful Will Stacks (Jamie Foxx, playing a version of Daddy Warbucks). The video of this incident goes viral, and Stacks’s campaign manager, Guy (Bobby Cannavale), encourages the candidate to spend more time with the young girl for the good publicity. I’m sure everyone can connect the dots moving forward, but Stacks and his staff (including Rose Byrne and Adewale Akinnouye-Agbaje) soon take an irreversible liking to Annie in which the filmmakers hope you will share.

As far as Annies go, Wallis is quite endearing. She has a wit and an attitude that isn’t nearly as annoying as it could be. The child actor tightrope is a fine line to walk; the two common extremes are either a terrible performance (Anchorman 2) or a turn that is so good that it creeps the audience out (early Dakota Fanning comes to mind). Well no one can accuse Wallis of being too good (especially her singing voice), but she is just right. Plus, she’s cute – not take-the-world-by-storm cute as this movie would have you believe, but cute nonetheless.

Unforthnately Quvenzhané cannot carry the movie all by herself, and while a couple of the adult actors don’t offend (Byrne and Akinnouye-Agbaje are enjoyable), mostly the film just feels too big. That’s a tough criticism to level at a musical – a form which is built on oversized spectacle – but the film doesn’t embrace its musical identity enough to get that pass. Certainly some of the songs from the stage show are so ingrained in the depression-era setting that they don’t work for a contemporary New York City, but the changes and new songs are awful – either pandering to the modern movie-goer with eyeroll-worthy references to technology (see: “I Think I’m Gonna Like it Here”) or striking the wrong tone entirely for the characters (see: Jamie Foxx’s “The City’s Yours”). This really is a shame because the film opens with an overture and three mostly unaltered songs (“Maybe,” “It’s the Hard Knock Life,” and “Tomorrow”) that are really well-done. Gluck’s direction and the choreography work well together in these moments; even if it isn’t the most creative work, plays into the aesthetic.

Annie seems to be fighting itself in search of its identity. Gluck’s claim to fame before this film was the Emma Stone vehicle Easy A, a movie that is genuinely funny at times, most often whenever Patricia Clarkson and Stanley Tucci are onscreen. There are lines of dialogue where Gluck’s sense of humor is evident in Annie, but mostly it is surrounded by distracting bits of showiness. Nowhere is this more evident than in Cameron Diaz’s performance. I probably laughed more at Diaz’s Miss Hannigan than any other character (as intended by the film), but hers is also the worst performance in the movie by far.

Annie is confused little picture, even in its execution of the musical conceit. It is common for musicals to feature both songs that are internal and songs that are external, but the concept of singing is at least accepted as the natural way of things by all of the characters. In Annie someone might break out into song and be looked upon as crazy by a character who herself was singing 30 minutes ago. A movie musical that cannot capture the general idea is doomed to fail, and Annie does that with the worst of them.