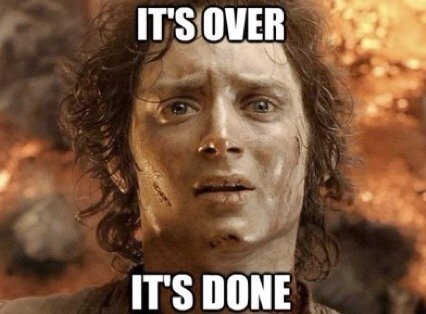 Wow. As I write this we are mere hours away from the end of an old year and the beginning of a new one. As we age, our subjective experience of time feels faster, relative to the total amount of time that we have consciously witnessed. Despite this, I have found a way to make time slow down, though I don’t necessarily recommend my method.

Daily reviews. It seemed like a doable prospect when I began this project on January 1st. I had already spent the previous month writing movie reviews on my old tumblr, and I desperately wanted to keep that creativity train rolling. See, despite the fact that I call myself a writer, I don’t really write. This blog was going to be a way to correct that. If I’m writing every day, surely some of that will be productive.

It’s hard to say if I got anything too useful out of these 365 reviews of varying lengths, but I did manage to produce a solid artifact of a year in my life. That’s pretty cool – the fact that at some point down the line I will be able to go back and see most everything that I did in 2014. Because even if I didn’t write about every specific emotion (although I did write about plenty of them), they are surely tied in some way to the subjects I did scribble down.

I won’t belabor this final blog entry too much. A quick stroll down memory lane and then off to the next chapter in my life. Besides anyone who has read even one of my reviews this year is probably already sick of my writing. I’m speaking mostly to my co-worker Matt who claims to have read every post I’ve written and has been begging me to mention him. I won’t call you my friend, Matt, because I don’t want to give you that, but you know the score. Some pieces of your year probably match up with some pieces of mine.

For me this was the year of movies (too many maybe). The year of libraries (and library fines). The year of losing too many friends (to more northern parts of the West Coast). The year of finding rewarding experiences in my job at the unnamed high school (without ever liking it too much). The year of trying to be more social (and mostly failing). The year of The 25th Annual Putnam County Spelling Bee (and all of the great memories it brought). The year of auditioning for The Book of Mormon (and accepting that my life isn’t ready to change just yet). The year of getting sick in May (and not getting better until December). The year of dating (and coming out of it with an awesome Primary Movie-Going Companion). The year of failing only once (but making up for it by writing two reviews the following day). The year of going back and forth on whether I have any talent at all (and still being unsure). The year of pizza and friendship (and all of the PizzaCasts they entail). It was the year of putting myself out there and trying new things, and though there are always choices you wish you could make again, doing this blog isn’t one of them.

2014 contained most of my 25th year and began my 26th, but writing a review every day has helped keep it all perspective. It wasn’t a great year, and it wasn’t a terrible year. But it was an important year – just like all of the rest. We only get to travel around the Sun so many times, and it is wise to take advantage of each one. I don’t know what’s coming in 2015 – I wouldn’t have been able to predict half of the things that happened to me this year – and that’s okay. I look forward to it anyway, especially since I won’t have to jump into panic mode around 9 pm every night when I have nothing to write about.

Thanks to any and all who joined me on this journey in 2014. I love you all. Happy New Year.