You hear people say “we’re in the Golden Age of television” all the time these days. Some have taken to calling our current climate “peak TV.” And while that descriptor certainly adheres to the recent influx in serialized dramas all over premium and basic cable, many argue you could apply the term to animation as well. I don’t buy in on many cartoons – even the ones geared towards adults can be hit-or-miss, especially when their entire shtick is the juxtaposition of a simple animated style with dirty jokes. But so many people – people I know personally, even – sing the praises of shows like Adventure Time or  My Little Pony, so there must be some merit to these programs. Last year I took a chance on one such show – Steven Universe – mostly because the main character and I share a first name (and he spells it the correct way). I was skeptical at first, but irrepressible charm and catchy music eventually yielded love; and with a batch of new episodes premiering this week, I figured this would be the perfect opportunity to write about a series that I have come to enjoy immensely.

Steven Universe operates on many levels, and as such I tend to judge episodes based on certain criteria. Those categories include humor, mythology, emotion, resonance, music, and action. In my years (and years) of watching cartoons, I’ve seen many shows that engage with at least some of those concepts, but rarely does any media manage to wrangle all of them the way that this show does. So how does “The Answer” measure up?

The episode’s greatest strength is probably its resonance. Creator and show-runner Rebecca Sugar has gone through much effort to make Steven Universe as much of a socially aware and positive show as it is possible to be, with some of episodes dealing with ideas as basic as being true to yourself and and others digging into issues as complicated as consent. Most of the characters on the series are ostensibly female (they come from a seemingly non-binary race of sentient gemstones with bodies that are physical manifestations of those gems’ auras. Or something) so there have been several references to what our human minds would perceive as lesbian relationships. The most prominent receives focus this week: Ruby (Charlyne Yi) and Sapphire (Erica Luttrell), who fuse together to create main character Garnet (voiced by British musician Estelle). “Fusing” is the show’s metaphor for sex, so of course it would be difficult not to read Ruby and Sapphire’s relationship as a romantic one, even if it weren’t so boldly acknowledged as such. The origin story of their love presented in “The Answer” is as much about teaching viewers to accept and embrace who they are as it is about teaching Steven (Zach Callison) where Garnet came from.

“The Answer” also adds more to the series’s mythology. The history of the world and the personal backstories of the individual characters have been integral to the series from the beginning. Steven and the three main gems (Garnett, Deedee Magno’s Pearl, and Michaela Dietz’s Amethyst) act as freedom fighters, defending Earth from the more nefarious gems who would sap its resources. This episode confirms aspects of gem society that have only been hinted at before (at least as they existed 5,750 years ago) and introduces us to Blue Diamond, who obviously bears some connection to current-day (presumed) baddie Yellow Diamond.

The only thing really missing in abundance in this episode is humor. Steven’s excitement in the framing device is enjoyable, as are some of Estelle’s voice acting choices, but Steven Universe is capable of being laugh-out-loud funny and unfortunately that’s not on display, with writers Lamar Abrams and Katie Mitroff focusing more on emotion and sweetness. They succeed, but it’s always nice when the episodes can be both.

General lack of humorous subtlety aside (though that’s a big piece of the equation to negate), “The Answer” is a pretty solid showcase of most of the things Steven Universe does best. The episode even gets in some brief-but-solid action in the form of Rose Quartz (Steven’s departed mother) and Pearl’s raid on Blue Diamond’s stronghold, and new music in the form of a song that recalls one of the show’s highest points.

This is the first of five new episodes dropping this week. They’re tightly packed and would probably benefit from being spaced them out, but I’ll take whatever Steven Universe they’ll give me. Will I continue to review the episodes as they come out over the next four days? I don’t know. I guess it depends on how strapped I am for ideas. But you all could do a lot worse than several reviews encouraging you to watch a really special show. I guess what I’m trying to say is “you’re welcome.”

“The Answer” isn’t the best that Steven Universe has ever been, but it’s still a bright light in “childrens'” entertainment. The episode receives four out of five starry eyeballs: 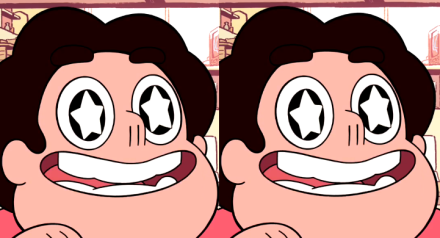