So Bowie Week got thrown off by really unfortunate circumstances, but we’ll finish it off strong today with my review of David Bowie’s first live album, David Live. Released in 1974, the various tracks were recorded at the Tower Theater in a Philadelphia suburb. Blackstar showed us a David Bowie transitioning into the final stage of his life, while Labyrinth showed us David Bowie the actor – a designation that necessitates transition. Interestingly, David Live chronicles a different kind of transformation for the artist, as he moved from one style of music to another. But how does that affect the product as a whole?

My favorite live album is probably Train’s Alive at Last. I don’t even like Train, but I was given the CD in late 2004, in an interesting era during which my family was splitting a lot of time between our home in Maryland and a condo in West Palm Beach where my dad was working. That disc (well, that and Green Day’s American Idiot – man, I had good taste at 15) was basically what I listened to on repeat during those trips. My affinity for Alive at Last is attributable more to that nostalgia than any concrete appreciation for the music of Train, but I do remember an almost corporeal vivacity to that album. 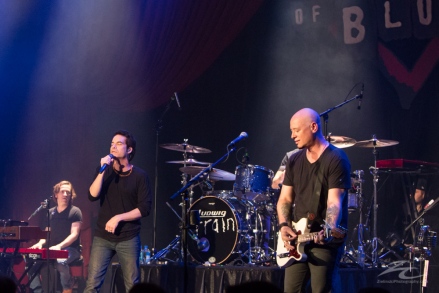 ugh – why did I bring these guys up again?

Live albums can often feel like fascinating miscellanea or touchstone artifacts within the narrative of a band or musician; if the group’s official discography is canon, then live albums and the like could be considered interesting apocrypha (unless we’re talking about jam bands like Phish – in which case the live experience is the experience). They should hardly be disregarded, though, as live albums allow the audience to hear things in a different, more energetic context; and they allow the artists an opportunity to redefine even their more iconic songs in a new environment.

Bowie takes advantage of this opening in David Live, showcasing drastically altered or slowed down versions of many recognizable songs, such as “Moonage Daydream,” “Space Oddity,” and “All the Young Dudes” (which he records himself for the first time here). These new arrangements are jarring on a first listen – the studio recordings of these songs are indelible – but one warms to most of them on repeat listens. Still, it’s hard to deny the palpable vigor present on the rare occasion when he performs other well-known numbers in their traditional fashions (“Suffragette City” features some new instrumentation, but is mostly intact). There’s an enthusiasm in those songs that just isn’t there in the revised pieces, though it’s certainly possible that this is my own bias.

I don’t fault Bowie for attempting something new, though. This was a time of change for the artist, as he was shifting his focus away from the glam rock that defined the first half of the 70’s for him and was beginning to explore a neo-soul sound. I suppose this explains all of the experimentation and an increased reliance on jazzy saxophone and piano throughout the album, but I can’t speak on it with too much authority. Aside from the hits, a good number of these songs were new to me; I’m not nearly as familiar with Aladdin Sane or Diamond Dogs – the albums from which many of the tracks come – as I am with The Rise and Fall of Ziggy Stardust and the Spiders from Mars. I enjoyed having the chance to familiarize myself with Bowie songs that I hadn’t know previously. Most of the songs on David Live are familiar hits, but I really took to songs like “1984” and “Cracked Actor,” which I had somehow never heard.

David Live probably lands closer to engaging curiosity than it does to essential listening in the Bowie spectrum, but there is an unimpeachable vitality to Bowie’s performances. Even the reworked songs – which might indicate a decreased investment in the material – possess a discernible brio; a zest that the man had lost by the time he recorded Blackstar in his twilight. The live album documents an artist looking to expand, which is almost never a bad thing. This is perhaps not the Bowie that anyone wanted to hear, especially not at the time, but it is the Bowie that he needed to be. David Live receives three out of five probing Big Brothers: