It’s time again for another Doug Benson Movie Interruption at Cinefamily in Los Angeles. For those who are unfamiliar, movie interruptions consist of Benson, a standup comedian/podcast kingpin, and his funny friends making jokes over a movie MST3K-style. Usually Doug chooses recent blockbusters (such as Thor: The Dark World) or recent critical failures (such as Maleficent), but lately he has been tackling movies with a better reputation, hence tonight’s interrupting of the Shane Black-written, Renny Harlin-directed 90’s artifact The Long Kiss Goodnight.

END_OF_DOCUMENT_TOKEN_TO_BE_REPLACED

When my primary movie-going companion and I decided to commit to two all-night movie marathons a month ago, we were not really sure what to expect. But after last weekend’s mostly-successful All-Night Horror Show, I was pretty sure I could get through the “All-Nighter on Elm Street” – consecutive screenings of the first seven entries in the saga of famed Springwood Slayer Freddy Krueger (played exclusively by Robert Englund in these films) – without too much trouble.

END_OF_DOCUMENT_TOKEN_TO_BE_REPLACED

October is for horror movies. I’ve said it before, and I’ll say it again. And I’ve probably seen more horror movies this month than I’ve seen in the last few years. Why not? They are really quite fun once you get past your initial nerves. Especially the older ones. The increased reliance on jump scares by modern horror directors has desensitized many moviegoers to the more cerebral horror from decades ago. So it’s nice to put away all the fancy new stuff, sit down, and watch one of two. Or six.

END_OF_DOCUMENT_TOKEN_TO_BE_REPLACED

It’s October, and October is horror month, but it’s already the 9th and all I’ve seen is Annabelle. Not an auspicious start. I do have a few things in the works for the rest of the month that ought to redeem it a little. The first is tonight’s Cinefamily double feature presentation of 2009’s Norweigan Nazi-Zombie film, Dead Snow, and it’s brand new sequel, Dead Snow 2: Red vs. Dead.

END_OF_DOCUMENT_TOKEN_TO_BE_REPLACED

Believe it or not, back in the day I actually went to a movie theater and saw Maleficent. It was a Friday night – June 6th, to be exact. Presumably I had tried to make plans and failed utterly, because I can imagine no other situation in which I would go to such a screening of my own free will. But there I sat, already having watched a true masterpiece earlier in the evening – Bonnie and Clyde. Guess which film I ended up writing about that night. Maleficent was so middle-of-the-road that I couldn’t even think of a couple sentences to toss off on Letterboxd. Instead I just rated the movie: 2/5 stars, which seems high in retrospect. I must have liked some aspect of the movie, though earlier tonight I could not for the life of me remember what it was. Surely watching the movie again with a bunch of comedians talking over it ought to refresh my memory. Right?

END_OF_DOCUMENT_TOKEN_TO_BE_REPLACED 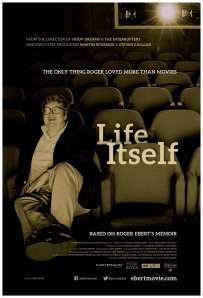 It is 2:20 am as I begin writing this review. I have no doubt the time will play a part in how short this review is, but the main reason this will be an abbreviated entry into my personal canon is because I have no place trying to write eloquently about the man who so expertly did what I stumble aimlessly through on this blog. Life Itself is a documentary about Chicago Sun-Times film critic Roger Ebert, and it is the best movie I’ve seen in 2014 (sorry The Lego Movie).

END_OF_DOCUMENT_TOKEN_TO_BE_REPLACED

I’m a sucker for comic book movies. Always have been, always will be. They were such a novelty back at the beginning of the new millennium. X-Men and Spider-Man changed the whole game. Up until that point all we really had were the Batman movies, which had gotten pretty dire by the time Arnold Schwarzenegger started spouting ice-themed puns (“Chill out!”). The best part about the comic book movie boom was that they were good. For the most part. The first two X-Men and Spider-Man movies are still looked on fondly, even though Tobey Maguire was not great in his role. The expectation is that quality would fall off as the years went on and the movies began multiplying. But that hasn’t happened. Thanks to Marvel Studios we’re now getting thought-out films that try to build something impressive, rather than just cash in (though they are definitely cashing in, big time). Just because I love the movies doesn’t mean I’m not more than willing to watch as Doug Benson and some of his comedian friends knock them down a peg.