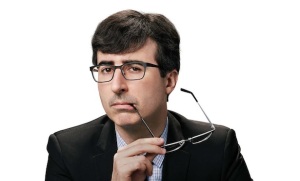 John Oliver: The British comedian you may not realize you know. After a pretty successful stint as the fill-in host on The Daily Show with Jon Stewart, HBO snatched Oliver and former Daily Show head writer Tim Carvell from Comedy Central to start a brand new satirical news program for the pay cable station. What they got was… pretty much The Daily Show.

Oliver opens the first episode by saying “Welcome to whatever this is,” so it seems he and Carvell are as baffled by what their program should be as we are. That is not to say the program isn’t funny; on the contrary, there are plenty of good bits throughout Last Week Tonight with John Oliver. Oliver is whip-smart and self-deprecating in a way that is incredibly endearing. His run on The Daily Show was great, and I am happy to see him flexing his muscles here.

But there is very little innovation involved, so far. The program makes fun of the many blunders and gaffs provided by the 24 hour news cycle, just like its basic cable counterpart. The show includes a couple voice-over short segments, as The Daily Show is wont to do. Oliver mocks an interview subject (in this case former NSA director General Keith Alexander), much like he did for Stewart.

It all goes well, but nothing feels uniquely Oliver’s. Nothing, that is, except the swearing. John Oliver is a very gifted profanitarian; he doesn’t use curse words too often, choosing instead to dole them out only when appropriate, to excellent effect. It is the kind of talent that has been necessarily bleeped out of his work on The Daily Show and his podcast The Bugle, but is free to be heard on HBO.

Now I’m not claiming vulgarity is enough to set the show apart. In fact, if Oliver and company aren’t careful it could become a hindrance, but it is at least an indicator that the new show is willing to take chances. This was the first episode of Last Week Tonight with John Oliver, and it’s nothing special, but Oliver is. Special, I mean. I have faith in the show’s creative pedigree. Perhaps Last Week Tonight will find its footing next week, that night.

One thought on “118 – Last Week Tonight with John Oliver”