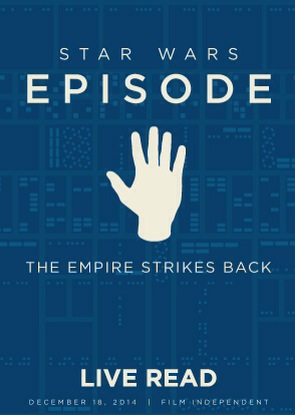 With the end of December (and the year) approaching, we come upon another of Jason Reitman’s Live Reads, hosted by Film Independent at LACMA. Only this time, the Live Read was not at LACMA; for December, Jason, Elvis Mitchell and the whole team moved to The Theatre at Ace Hotel, formerly known as the United Artists Theatre. Such an expanded venue could only be necessary for one film: The Empire Strikes Back.

It is a tricky proposition, to stage a reading of Leigh Brackett and Lawrence Kasdan’s script (based on George Lucas’s story, of course), but Reitman went the extra mile – as usual – to procure what seemed like the perfect cast for such an endeavor. In order of introduction, the cast included:

This was the cast as announced prior to the event, but when Reitman looked upon the assemblage he decided it was incomplete. The director added to more members to the group – first Rainn Wilson as Chewbacca, confining the actor to the Wookie’s guttural growls; and then Mark Hamill himself as both The Emperor (voiced by Clive Revill in the original release) and Obi-Wan Kenobi (originated by Alec Guinness). The former was an amusing modification, but the latter was a real surprise, prompting a standing ovation from the audience. Since the release of the original Star Wars trilogy, Hamill has primarily worked as a voice actor (most notably as the Joker from Batman: The Animated Series); it’s a treat to see the man work so comfortably in his new element.

Hamill was not the only one; several of the actors onstage are no stranger to voice work. Merchant and Pollak are excellent vocal performers, and they embued their characters with much personality. Pollak provided an excellent recreation of Oz’s original Yoda voice, while Merchant made C-3PO his own, yielding a less dainty and more sassy robot. Simmons, likewise, was able to use his voice to great effect, utilizing naturally deep and gravelly tones to evoke Jones’s inherent gravitas.

Unfortunately the central trio was not so strong. Aaron Paul seems to be trapped in a perpetual state of brooding disaffectedness ever since the last couple seasons of Breaking Bad. He relied on it heavily in Need for Speed, and it even pops up in his small Exodus: God and Kings role (more on that film later in the week). He brought the same energy (or lack thereof) to Luke, which is a bummer as the young Jedi is supposed to be this wide-eyed kid seeing the galaxy for the first time. Paul’s jaded cool guy just didn’t do the character justice. And as for Alba’s Leia? Bless Jessica Alba’s heart for doing her level best, but the character is stuck either spouting technical jargon or being wooed and traded by various men. It’s tough to make an impression in such a situation, so I can’t blame the actress completely.

Somewhere around the 20 minute mark, however, things look up, as Page finally clicked with the Han Solo role. Her portrayal started a little too nonchalant. Ford’s performance is defined by his apathy towards galactic politics, but Page was directing a little too much apathy at the exercise as a whole. Once the actress got into the role she slipped easily into Han’s smooth charm. It was an interesting experiment by Reitman, who had previously gender-swapped Glengarry Glen Ross, and it added a new context to some very familiar dramatic beats. Of course, it also gave one audience member the bright idea to yell “do it!” when Reitman read the action line describing one of the multiple kisses shared by Han and Leia in the film. Probably the kind of objectification Reitman was hoping to avoid, but that is unfortunately the nature of the beast.

Another nature of the beast? All of the reading Reitman had to do. The Empire Strikes Back is a really exciting film, but listening to Jason Reitman read about spaceships flying and blasters firing and lightsabers dueling is not nearly as fun. It kind of understandable why he has never attempted anything like this before. That said, any Live Read is a good Live Read. The events draw attention to the scripts of famous films and give audience members an opportunity to witness a one-time-only event. As long as Reitman is interested enough in doing them, the audience will continue to support him.