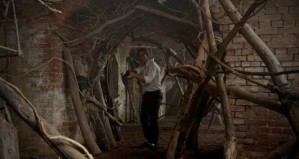 And so ends the first season of True Detective. Before we get too deep into it I want to take the opportunity to mention that some of what I say may be considered SPOILERS. I won’t get too into specifics or anything, but if you are like me then you will not want to know anything about the finale before you watch it. In that case I would ask why you’re reading a review, but it is your life. Do what you want. I am really into the laissez-faire Internet browsing.

So the episode happened. And after eight weeks of excellent monologues – but not much else – the show wrapped up with a final episode that was fine. Luckily the heavy-handedness of last week’s penultimate episode did not carry over to the finale, but it did have it’s own difficulties.

On the positive side, the episode finally gets back to the great interactions between Detectives Cohle (Matthew McConaughey) and Hart (Woody Harrelson) that made the show interesting from the beginning. One thing writer Nick Pizzolatto has handled consistently well has been differentiating between the timelines, while keeping the characters true to what has been established previously. So when we finally see Marty and Rust bicker in the car it is like coming home again, despite the fact that from our perspective they were doing the very same thing two or three episodes ago. The episode also provides a conclusion to all of the threads that have been floating around since the premiere. All of the questions (which are not too many at this point), get answered.

In a way the conclusion is a little too nice. Everything works out exactly the way that you might expect, which is extremely odd for a show that has seemingly been trying to defy procedural structure for the last seven weeks. Aside from some extra violence, nothing distinguishes this episode from the average cop show. There are no real surprises in this final hour, and most of the interesting avenues the story could travel down are left unexplored.

These are the same complaints people had about the ending of Breaking Bad: everything worked out too perfectly for Walt, and all of the conflict the characters had encountered up until that final episode seemingly disappeared in the interest of giving Walt the ending the writers thought he needed. The Breaking Bad finale worked for me though, because that show was an epic experience. The old adage that “it’s about the journey, not the destination” is a cliche, but it is a cliche because of its true. Breaking Bad jumped off the blocks and coasted to the finish line; True Detective stumbled early and never regained it’s footing.

This is partially due to the show failing to figure out what it wanted to be. Was this a procedural or a serial? Are we interested in the characters or the mystery? Is Matthew McConaughey going to talk about being his own hero at any point? The show never made it’s intentions clear, which is not necessarily a problem, but becomes one when the majority of your viewers are scanning every episode for the tiniest pieces of evidence to support their outlandish theories. In that case, it does not look like your intimate character study has done its job. True Detective was an effective delivery system for McConaughey and Harrelson Emmy nominations, but never followed through on the promise of its pedigree. Perhaps it will benefit on a rewatch, but I will not be in a hurry to undertake that endeavor.

Hopefully Pizzolatto and director Cary Joji Fukunaga learned something from the first season. There is definitely a lot of potential in the concept of a detective anthology series, and I will give a chance to whatever new iteration we get next. Maybe Detectives Gilbough (Michael Potts) and Papania (Tory Kittles) will finally get a chance to do something. That would finally give me the chance to use my “Potts calling the Kittles ‘black'” joke that I have had locked and loaded all season. For now all we can do is hope.