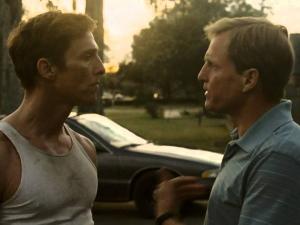 talk about a meet cute!

It is hard to discern whether True Detective is getting better, or whether I am slowly getting used to what it is going to be. There’s bound to be a learning curve to any slow-burn show, but there also seemed to be a step up in the writing this episode. “The Locked Room” definitely felt like  showcase for both Woody Harrelson and Matthew McConaughey, and not just the latter. This allows the two actors to turn their scenes together into competitions, a situation where the viewer wins.

In “The Locked Room” Detectives Hart (Harrelson) and Cohle (McConaughey) continue their investigation into the ritualistic murder of a young woman, while revealing more about their personal lives to the audience and to each other. This description is very similar to what I wrote last week, and I expect it to hold true throughout the run. This show isn’t about the plot – at least not just yet.

Now that the nature of the central partnership has been established, writer Nick Pizzolatto uses this episode to let his characters verbally spar. Throughout the episode the two characters debate various topics, and in contrast to previous weeks Detective Hart is not going to just surrender the upper hand without a fight. He really holds his own in these discussions which is a nice change of pace after he was kind of submissive to Cohle’s rantings before.

It is unclear whether this is a writing choice, or a character development. Hart seems to be on the cusp of a mid-life crisis, so it wouldn’t be entirely inconceivable for the man’s personality to begin changing in subtle ways (his wife says as much at one point). Harrelson really takes advantage of the material given to him, coloring Marty in a lot more than we’ve seen before.

McConaughey doesn’t take a backseat though. I’ve been thinking a lot today about how the actor has tamped down his natural charisma in order to play the role. Cohle doesn’t have the endearing charm of most McConaughey characters (even the homophobic main character from Dallas Buyers Club has it). The swagger has been replaced by existential blather spewing from an abrasive mouth-fountain. Early in the episode 2012 Cohle bemoans the tunnel-vision cultivated by organized religion, but he is a victim of that same tunnel vision, only his religion is this investigation. Cohle is solely focused on solving the case, and all other personal responsibilities are sacrificed. Well, all except his self-imposed responsibilities toward Marty’s wife.

In that way the show is on the verge of becoming a little predictable. An affair seems to be a forgone conclusion, as are the suspicions of the two detectives interviewing Cohle and Hart, re: Cohle’s involvement. I really hope the show finds some way to subvert these expectations that have formed in my mind, as any truly great show would.

I’m still not ready to bestow that “great show” title on True Detective. It is definitely entertaining, and there’s pretty much no way I won’t stick it out at this point, but I’m starting to worry that my hopes for what the show would be will never quite be met. You never know though; “The Locked Room” ends in a way that suggests huge events will go down next week. Hopefully the next episode shakes up the formula a little, because it’s about time this show moved out of its comfort zone.